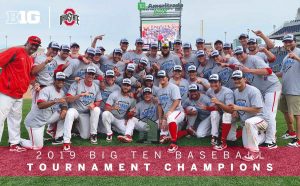 OMAHA, Neb.  – It was a magnificent Memorial Day Weekend for the boys. The Ohio State baseball team went on an unbelievable run, winning two games Sunday to claim the 2019 Big Ten Tournament title at TD Ameritrade Park in Omaha, Neb. The No. 7 seed Buckeyes became the lowest seed to win the tournament after defeating...

All RIGHT...heading to Nashville to take on Vandy @ 7:00 PM, Friday night, on a two game winning streak while winners of 11 of their last 13 games...
Won in Omaha, hoping to end a circular trip ending back in Omaha for the CWS.

This was a great win for the Buckeyes. They have improved greatly over the season and I would to see them knock off Vandy on Friday.