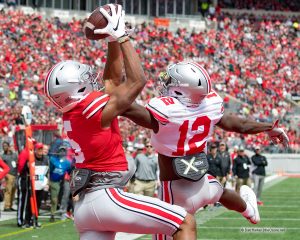 From Lake Travis High School in Austin, Texas, Garrett Wilson is a 5-star prospect and the No. 2 wide receiver in the 2019 class. He was the No. 20 player overall and a US Army All-American. The first time Buckeye head coach Ryan Day saw Wilson in person, he was in Austin to watch quarterback teammate Matthew Baldwin throw. While doing so, he also noticed...

Hopefully this kid is not made to sit behind Mack and Victor...just because they're seniors.

Some of his moves on the screen in the first clip remind me of Ted Ginn,Jr.