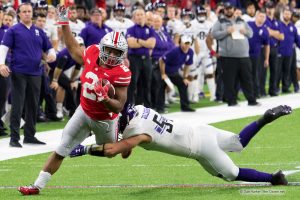 So I predict five things for every Ohio State game. The Buckeyes have played six games. Last week, I said I had gotten 16 of my 25 predictions correct. However, as a calculator has pointed out to me, there should be 30 predictions total. I don't know where those five predictions went or who took them, but this is very typical in the prediction industry.

1. NU throws 3 or 4 ints. early and PF shuts down the passing game because they trail 14 to 0 without the Ohio State offense reaching the endzone up to that point. Because of that. NU runs the ball 40 times against the Buckeyes but only gain "90" yards.

2. The only talking point FOR NU is their defense. By the final gun even that will be a relic of the past. The Buckeyes rush for 400 yards+ with run run run, run run pass, to keep Justin Fields out of harms way until NU simply throws in the towel.

3. Chase Young gets 2 sacks. That's only because PF was afraid........he was very afraid and stopped all pass plays. Otherwise Chase would have gotten at least 3 all by himself.

I predict Borland chasing someone. And not catching him