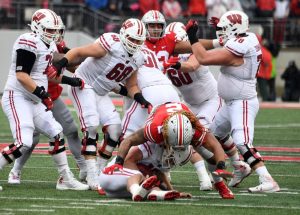 The Buckeyes and Badgers met in what would have been a much bigger game if not for the Badgers stubbing their toes in Champaign last weekend. Wisconsin still presented the most difficult test to date for the Buckeyes and all Ohio State did was win by 31 points on a day with weather that made passing difficult. It’s been a difficult season to...

hard to complain in this game but wisc was getting pretty close t blocking punts before they did get the partial block and i really, really wish OSU would just kick the ball out of the end zone on kickoffs if they try a couple the normal way and it's not working stopping them inside the 25...and the pass given up for a TD..Coan made a PERFECT pass we probably (hopefully) won't see again all year...byes suck but good week for one and stay injusry free next 2 games before the 2 big showdowns...we CANNOT lose to PSU ...go BUCKS!

Disagree only with the Chugz situation. It puts on film a) that the Buckeyes are willing to run with their backup so a team can't sit back and relax but better be prepared to defend it, b) gives the coaches something important to work on (execution in this type situation), and c) helps provide insurance should Fields get dinged up on a play rather than a simple helmet pull.
Other than that, spot on.

I was peeved when in the third-quarter just after Ohio State scored in Wisconsin had the ball that Chase Young dropped inside and allowed Conn to go outside for 12 yards. I did not expect that from the greatest defensive player in the world.

Jeff Okudah was looking straight at the ball, was a little selfish and dropped and was waiting for the ball to fall in his lap instead of jumping and breaking the pass. Frustrating moment.
KJ Hill is a senior, should not be taking his eyes off of the ball. Also never found the fade ball. I don't think that should have been called for him. Wilson or Olave would have found it in the air. Great player though and glad he is back for his senior year.
OL early struggles can stop now.
Hurry up and punt please.
Agree on kickoffs. Wisconsin put a bunch of players in a lane and they blocked while the returned slowed down and waited for the blocks. They did not have an answer for it. Kick in the end zone. Simple.
Where is Victor?