KJ Hill: 'I Only Get This Chance Once In a Lifetime' 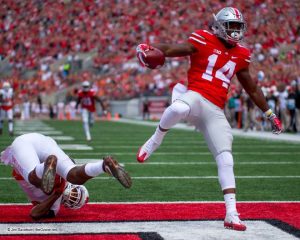 KJ Hill's first catch as a Buckeye was a 47-yard touchdown in the season opener against Bowling Green in 2016. He has added 141 more since that catch, which now puts him seventh all-time in OSU history. He is two catches in front of Santonio Holmes, and one behind good friend Parris Campbell. Campbell is now gone, however, as...

LOVE this guy. I knew when he flipped his commit and came to Ohio State that the Buckeyes had brought in one of the surest hand receivers maybe in the long history of the Program. Plus he's such a high caliber character guy and he doesn't take "good enough" for a final answer. His family is great and he is certainly that as a player and a person.

50 receptions to match David Boston's record.................pffffft how many will KJ add to his 1st place position after the MSU or Northwestern game?

the guy just doesn't drop anything! great hands and technique. seems a cross between a slot and reg wide-out, and will be very valuable also at the next level

In the photo above.......looks like KJ farted and blew that poor defender head over heals.