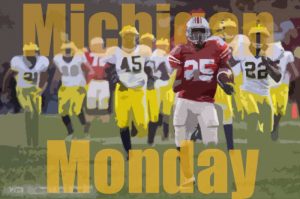 I'm not even sure really where to start. Maybe I'll start with a timeout like Michigan did. The Wolverines got the ball first in their 28-21 loss at Penn State Saturday night, but had to call a timeout before their first snap in order to avoid a delay of game penalty. If that's not a sign of the times, such a thing does not exist. The game's first play...

I took some Dramamine and watched these 2 programs- one which should have been death penaltied and the other which has been dead for decades- play one another. Since it's always fun and deserved to rip UM, I am struck by how consistently this team manages to avoid a positive identity. They are collectively similar to a weird foreign film in which the actors fail to interact or provide any sort of cogent purpose. The negatives, however, keep reasserting themselves. Poor DB play (can Hawkins and Metellus have lifetime contracts?), weak O Line play despite all the preseason accolades, and this weird UM habit of taking "talented" players and castrating them (the WRs). The REAL fun will come when UM drops two more games before OSU and the cannibals start eating one another in the locker room. Watch them crumble...
Never let up on those turds, keep the disdain coming!!!

Ironic how similar TTUN is with Notre Lame. This weekend's game will be a mirror of each of them - past glories living in their respective pasts.

Hopefully there’s no gravy for that sinking ship. Hope ND can muster enough of a game plan to let the scUM faithful realize the season is over. Love the mess that is Wolverine football, keep up th good work Jimmy.

Is it possible they haven't been targeting Collins and some of the other WRs as much as Bell because they have been seeing drops in practice? Or is it just a matter of Bell usually getting a lesser defender and Patterson locking in on that. Or a mix of both.

Dennis- I am proud not to know TOO much about UM football:) I think it's ineptitude among the staff and a vast overrating of Patterson. Did you see there's a report that Jimmy H is now exploring the NFL, since he has failed as the messiah at UM?