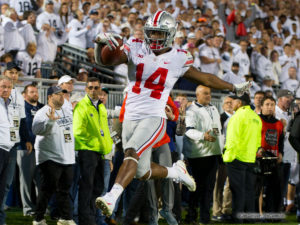 The No. 2 player on this list scored a 47-yard touchdown on the very first touch of his college career and is now just 48 receptions away from breaking David Boston's career receptions record at Ohio State. Following an official visit to Alabama in January of 2015, KJ Hill decommitted from his home-state Arkansas Razorbacks. He eventually signed with Ohio State...

Not many sure things in life, but KJ comes pretty darn close. With a new QB, I'm thinking the record should fall in the PeeSU game - in from of the homies. Go Bucks!

the guy just does not drop the ball, or juggle it or anything. he's just a catching machine; and a plus after the catch by getting what he can (meaning not looking to reverse or get wide, but just getting the yards he can and get down.) totally reliable receiver.