Ohio State Football Notebook: 'BB will have to get his own gig' 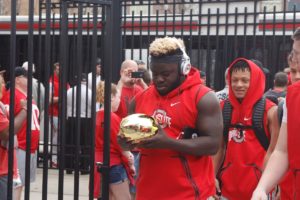 Just so you're aware, Ryan Day is not Urban Meyer. Now that you know that, we can begin discussing how the two are different. Just don't expect Day to be participating in that conversation. He's too busy being Ryan Day. "I think the easy thing to do is to ask how are you different than Urban Meyer, and that's not something I really like to answer because...

rotfl......Love Jonathon Cooper and BB. Both of them are fruitcakes in dire need of a restaurant to serve them (eyes Eddie). Of course, neither of them possess the dash and success probability on camera as Dre'Mont Jones or Bobby Carpenter. Always thought Sclegs should have opened a restaurant called Boars Head. The ads would picture him slaying the catch of the day with his bare hands to be served during prime time hours.

Both Damon Arnette and KJ Hill have a legit shot at being named 1st team All American following the 2019 season. Damon is about to silence his critics.