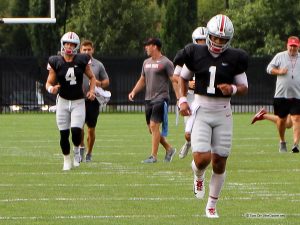 COLUMBUS -- The Ohio State football team was back on the field for practice No. 11 on Wednesday. Media was permitted to watch the first six periods of the action. The early portions again included stretching, jogging, and punt team work. Not much more could be gleaned than what we've already covered here, but I'll empty my notebook anyway.

Any update news is good. The closer we get to the season opener the tighter the window of reporting updates gets shorter. Frustrating for us, but it's to be expected.

I do have a question though. Was Teradja Mitchell back on the field?

Nice report and it's fine that there's not much to report except that everybody is working hard and some injured players will be ready to play soon. I think it's fine for coach to wait before naming starters and not wasting time fueling speculation. It's camp and these guys should be doing nothing but focusing. Things seem to be going well. I'm enjoying this August much better than last year. I like Coach Day's lack of drawing attention to himself and no front page dramas. Let Mr. Harbaugh be the center of the media circus. He's doing well at that with his shady insinuations regarding Luke Fickell. Harbaugh is a strange man. That lifetime career humiliation he received from Ohio State last year has unhinged him even worse. If he loses to the Buckeyes this year, especially if they are undefeated, Jimbo will lose whatever is left of his sanity. But I digress...it's a beautiful day in the neighborhood and I smell football.

I didn't see Mitchell with the injured players, but I also couldn't see the LBs well enough from their position 100 yards away to see him there either.