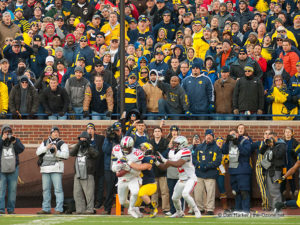 February 13, 2013 | Prior to Jim Harbaugh's arrival at Michigan, Brady Hoke was the Michigan Man in charge for the Wolverines. Hoke was constantly out on the recruiting trail looking for other Michigan Men to join his program. One specific area where they were looking for such models of inconsistency was at wide receiver, and boy did they find them.

I'll bet that Hecklinski wished that Drew Dileo was a step faster than Tyvis Powell. And that attitude/philosophy is why he's still a position coach after 20 years walking the sidelines.

I know we have gotten way better recruits, but didn't Brian Hartline just make the exact same statement about speed not too long ago?

I don't recall such a statement. Do you have a link or a quote? And if he did say it, his would be the odd example of "Do as I do, not as I say."