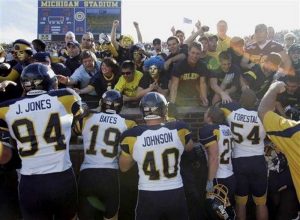 October 12, 2008 | You may not know this, but year in and year out, Michigan football was not always one of the Big Ten's seven or eight best teams. For a three-year period beginning with the hiring of Rich Rodriguez in 2008, they took a significant step backward. In Rodriguez's first season, the Wolverines managed a pitiful 3-9 record, which...