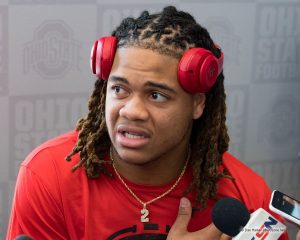 Spring football is now over and done with for the Ohio State Buckeyes, which means it is time to try and piece together what the depth chart looks like. Yesterday, we looked at the offense, so today we will move on to the defense. With the bulk of the defensive starters returning from last season, the depth chart shouldn't look too differently...

Even though Wilson grabbed that TD over him, Im predicting Sevyn Banks will be the next great CB for the Buckeyes. The kid is a competitor and looks the part. Watch out for him to make some noise this year.

Do we just feel sad and sorry for poor Larry Johnson. I mean, he's only got 16 bodies capable of being at least All Big 10 in 2019 who he can start! Poor guy must be having sleepless nights.

Ome guys just aren't meant to be flipped and flopped to various positions. Baron Browning is one of them. He's a SAM linebacker. PERIOD.

Give me Teradja Mitchell to start at Mike and Tuf Borland to be his back-up.

I wouldn't be all that upset seeing Jahsen Wint as the 1 high safety. Watched his performance with a lot of interest in the Spring game, he can move, he can cover a LOT of ground, and he packs a major league thump when he arrives. The new defensive scheme appears to be exactly what the doctor ordered. SE BALL, GET BALL.

No mention of Marcus Hooker???

He's been injured all spring. I meant to include him before I hit publish. I'm assuming he'd be at SS right now. I'll fix it. Thanks.

Mitchell is not ready to play mike. Hell he didn’t have a tackle last year except maybe special teams. Borland is the natural mike. Zach Birem was not fast either but could read and was intense as hell. Give Borland a break for God’s sake. He played for a dumb ass LB coach last year and played on a never healed Achilles. Funny the year before when he took over the mike he was a hero. But when he plays all year last year injured and in a ridiculous scheme he is a goat. All of you arm chair coaches go to hell.!!! You know nothing about playing Mike.

Ah, the ever predictable "arm chair coaches"..........blah blah blah. I know a little bit about playing the MIKE position. I think most would agree, Tuf was injured last year and piss poor decisions by a pathetic LB coach and DC risked Tuf's career by putting him on the field AT ALL in 2018. Maybe you should make the tiniest bit of effort to know what people actually think before making assumptions. NOBODY is going to remember his back half of 2017 level of play (he played outstanding but was no hero). People, including scouts are going to remember that he was the defensive signal called for 2018 for a Buckeye defense that was one of the worst defenses in school history. He "could" change some people who matter's minds, but it seems that he's struggling to even get or be healthy enough for 2 hand touch. This is Ohio State, you'd be 180 degree's off mark if you don't think people who matter aren't taking note.I know Mike D'Andrea fairly well. The man was a flat out baller and maybe the most Natural Mike linebacker the Buckeyes landed up to that point, since Chris Spielman. THEN he had injuries and he just wasn't the same hungry punisher he was before. Not every player recovers from injuries in the same way and getting over the mental aspect is sometimes harder to get beyond than the injury itself.

Nobody dislikes Tuf Borland, and I suspect the majority would like to see him return to how he played in the back half of 2017. The facts are, 2018 was a disaster year for him no matter the reason or excuse. Historical awful defense in scheme AND in player execution where he was the signal caller. Now when we have a chance to see how much of 2018 was scheme.........Tuf can't play and this time it's his knee. But for you, it's us "arm chair coaches" who are the problem. Instead of being all twisted up, maybe you could try looking at the facts, and actually listen to what people really think instead of what you "think" they're thinking.

Maybe Tuf can be Johnnie Dixon in persevering and overcoming injury. Or maybe he'll be unable to respond like was Mike D;Andrea's case. It doesn't make them any less terrific young men if something keeps getting in their way.