State of Buckeyes' Offensive Line Good As It's Ever Been? 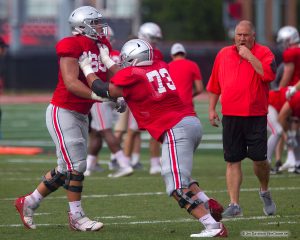 When Ohio State offensive line coach Greg Studrawa surveys the practice field, he sees a large number of his players who are capable of playing this season. And not just playing, but playing without fraying his last seven nerves. The Buckeyes have 15 scholarship offensive linemen on the roster, which is still one or two below where Ryan Day would like to be.

Wow. If this is really true and not fluff...it will be the best news we could have imo. Was really worried about oline. With Dobbins and Fields and oline as described dare I say we might have a rushing attack like 2013 and not 2018.

Sounds good and hopefully it's true. If that's the case then Fields should have no trouble breaking records and the Buckeyes should go undefeated this year as long as the defense keeps their end of the deal and barring injury. It's a thankless schedule in many ways with a tough conference slate and nothing but punching bags in the out of conference part so it will take an undefeated record to impress the poll makers. Having an offensive line that's "as good as it's ever been" will surely help.