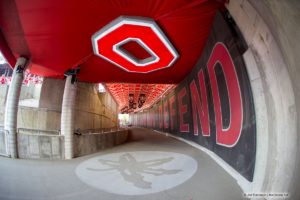 There are three games between ranked opponents this weekend and at least four other games that feature ranked teams playing on the road against opponents who could pull a Lovie if people aren't careful. ESPN Gameday is in one of the Dakotas this weekend, but that's mostly because they didn't want to go to the big FOX game of Wisconsin at Ohio State...

I'm not cheering for Michigan. There's something wrong with people who advocate cheering for UM. Grandma said they were tetched in the head. We can't count on a 3-4 loss has been team to make the Big Ten look good this year so don't bother. I don't buy that they've found their mojo coming back with PSU because I think PSU is overrated. They beat Pitt. Big deal. Ohio State is a level above all of them this year and they deserve their ranking. Screw the Blue. Win the Big Ten and the rest will sort itself out.

Glad you explained yourself, Gerd, but "Not so fast, my friend!"
The Plan is for Jeaux to win out, eliminating Gawja and everyone else in the SEC IF Auburn can somehow win the Iron Bowl. That's what I'm shooting for and all the fun media about #1 LSU and #2 Ohio State in the playoff.

Buckeye All Star- agree wholeheartedly. That's at least twice in 2019 this column has advocated "cheering" for UM . Their is a big difference between cheering for someone and predicting they will win. True OSU fans do NOT cheer for UM, for a long list of reasons. The operative one in 2019 is that OSU doesn't "need" UM to be good. Let them crumble and do NOT cheer for them- they are a punchline.

OSU 30-Wisc 17..if wasnt raining would be not as close but it IS a factor with the speed......I think we should be rooting for mSU, not PSU--would be great to give the only other eastern div unbeaten a conference loss and going MSU 21-20 for the upset...i think scUM beats ND at home 27-24..just not impressed with ND....and i'm not "rooting" for scUM--but less against..than ND lol....plus a 2nd loss will totally eliminate us from even having to hear how ND could still make the playoffs with 1 loss ...go Bucks!!

This. Cheer for LSU to go undefeated and every other SEC team to have two losses.