WHAT IF: Ohio State Beat Michigan State In 1998 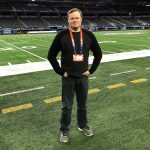 It was, is, and forever will be one of the most inexplicable losses in Buckeye football history. John Cooper's best team, absolutely loaded with veteran stars across the board, somehow blew a 24-9 lead midway through the third quarter. It happened at home against a Michigan State team that was thoroughly unimpressive for the rest of the year. But for about an hour...

What if??? Well if they had beaten Michigan State they more than likely would have shit the bed yet again against Michigan at home under John Cooper!

Maybe it’s my device, but just pointing out that on mobile the google ad at the top of the screen after the header photo loads and blocks the first paragraph of every article. Not the end of the world but still...

for painful, natty impact games, least us not forget the huge, come-from-ahead loss AT HOME vs a TX team that had been completely outplayed in 2005 from the 2nd Q on up and until they turned a game-winning int at the TX 28, up 6 with about 6 min left in game. but that was plenty of time for Tresselball to rear its ugly head by losing 12 yards on three of the most stupid, conservative play-calls ever, setting up a missed (by about a foot) fg to go up nine and win game (TX had run through all the time outs, and had about nine total yards in the 2nd half, But noooooo! Jazzed by the missed fg, then interference and then V Young did his thing, and....the rest we know, and then we all got beaten down with the narrative of how dominant and great TX football was when they scooped up the natty that the Buck had gifted them (leaving OSU with the runner-up trophy of laying a beat-down of historic measures against ND). Horrible loss, and the worst! (up until Wiley went brain-dead in the Fiesta a couple of years later against UT again by running a dive play in for a td with a min left, allowing McCoy to make an incredible comeback (guess falling down on the 2 was not coached by the Tress or understood by Wiley, as that would have only meant an extra point fg to win the game at the buzzer, while McCoy watched from the sidelines).
AARGHHH!!

Matt, what device/browser are you using? Thanks.

I was at that night game. You could hear a pin drop as the thousands of fans were leaving at the end of the game.

That game summarized John Cooper's entire career at OSU, he never was able to capitalize on his talent, he couldn't win the big game and his team did not have the discipline to ever come back. The forgotten note was the coach on the other sideline, Nick Saban and under him, MSU had the grit and enough talent to outplay any opponent for a stretch, especially when one wins the jump ball. Being a stat geek, OSU was the only power 5 conference team that ranked in the top 5 in total D and O that year!

True, however, our major loss was Tom Hermann, and our O was off track the entire year. MSU was not mediocre, they went on to win the B1G 10 title game and play in the BCS playoffs. If OSU would have escaped that game, they would have definitely lost again as Urban fixed the O after that game and OSU went on to run over MI and ND.