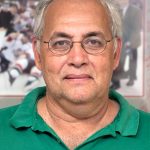 John Porentas is a native of Toledo, Ohio, and attended Ohio State from 1965 to 1970. After a two-year stint in the U.S. Army he returned to New York where he was the national sales manager of a small manufacturing company servicing the gift and souvenir industry. His customers included, among others, the Disney Parks, the Six Flags parks as well as Cedar Point and Kings Island in Ohio. He also represented his company at approximately 30 trade shows annually and traveled coast-to-coast in that capacity.

Eventually he returned to Ohio where he founded a company in Bowling Green, Ohio, involved in the fashion accessory manufacturing business. His clients included small, medium and major retailers from coast to coast as well as export clientele in Asia, Israel and South America.

In the late 1980s John took a break from the accessories business and purchased a working farm in Wood County near Bowling Green. He operated that farm four years during which time he grew row crops such as wheat, corn and soybeans but his main focus was livestock. He produced swine, lambs and meat chickens as well as eggs from a small flock of about 200 layers. His swine production was just over 1,000 head a year.

John’s farm enterprise ended when a freak flood of the Portage River cost him a year’s production. As a result he moved on from the farm business and relocated to Columbus, Ohio, where he re-entered the jewelry manufacturing business, this time as a producer of ceramic, fused glass and copper-enameled components and a line of finished product featuring those components. He was also involved in the importation of jewelry components from Morocco and was a frequent visitor to that country in the middle 1990s. His passion, however, was Ohio State sports and writing.

In 1996 he along with Robert Bradlee and Theodore Saker founded the-Ozone. John was the-Ozone’s lone full-time writer while Bradlee handled the technical aspects of Web publishing and Saker acted as the overall administrator of the enterprise. John covered Ohio State football, men’s basketball, women’s basketball, men’s ice hockey and baseball as a full-time regular beat writer as well as other sports when the occasion was appropriate. He also handed all marketing responsibilities including ad sales. In 1998 John bought the shares held by Bradlee and Saker.

John has been involved in the production of three books on Ohio State sports in addition to his writing efforts for the-Ozone.

John’s writing responsibilities have decreased  through the years as he has concentrated more on the business aspect of the-Ozone.

John has three children, two of whom currently reside in Ohio and one in Arizona. All three are Buckeye fans and two of the three attended Ohio State.  John still resides in Columbus near the OSU campus. 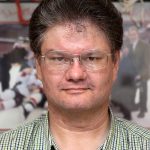 Jim Davidson joined the-Ozone in the fall of 2002 and has been a fixture on the staff ever since. Originally from Massilon, Ohio, Jim’s first interest was football but as the years have progressed he has come to be known as one of the finest photo catalogers of all OSU sports but especially men’s and women’s basketball and baseball. Since 2002 Jim has published more-than 70,000 photos of OSU sports activities. He has been on the sideline for four national-championship football games, numerous bowl games, Big Ten championships in football, basketball, baseball, women’s basketball and other sports as well as a CCHA tournament championship in men’s ice hockey.

Jim is a veteran of the U.S. Navy having served six years as a submariner before beginning his college career at Ohio State. He was an engineering student and is considered an authority in the use of CAD in the development of site preparation for construction projects.

While Jim’s training is in computer science his passion has always been photography. He is known not only for his sports photography but for his city-scapes as well. His second passion is cars. He is founder of the F-Body event which annually attracts hundreds of classic Camero and Firebirds and the occassinal GTO owner for a weekend of drag racing, motocross and camaraderie. Jim participated in that event as a car-owner and entrant but also was the official photographer where he captured the essence of the classic muscle car.

Jim’s training is technical and mechanical and his proficiency with computers makes him a strong participant in the age of digital imaging with respect to both still photography and video. What sets him apart, though, is that in addition to his technical skills he has the eye of an artist when it comes to photo composition and photo editing.

Jim’s work is seen primarily on the-Ozone, but has appeared in numerous other publications including Sports Illustrated, ESPN the Magazine, ESPN, the Big Ten Network and countless other web and print publications.

Jim’s work was featured in a book titled Glory Years published by Triumph Press. The book was a photo-history of OSU football from the beginning of the Jim Tressel era through 2007. 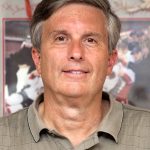 Dan Harker is a native of Youngstown, Ohio, who matriculated at Ohio State in 1970. He was an engineering student at OSU and began his working career as a logistics specialist in the chemical industry. Dan moved up to a management position early in his career and displayed a talent for business. He eventually rose to be CEO of Pittsburgh-based Calgon and later was vice-president in charge of global manufacturing and purchasing for Chicago-based Nalco. Both Calgon and Nalco are industry leaders in the field of water treatment. During his time at Calgon the company was extremely profitable and was eventually sold to a French concern called Suez.  While at Nalco his efforts helped the company to a successful IPO.

Dan retired from the chemical industry shortly after the Nalco IPO and returned to the Columbus area where he and his wife now reside. The retirement allowed him to pursue his passions, sports and nature photography. Dan joined the-Ozone staff as a sideline photographer in 2008. Under the tutelage of Jim Davidson Dan quickly became a proficient sports photographer who routinely catches the critical action shot. He has an unteachable talent for catching images that capture the emotion of the moment as can be seen in his shots of coaches, fans in the stands and players on the bench and sideline.

When he is not shooting sports Dan shoots nature photography. In recent years he has made photo safaris to East Africa, The Amazon, the Galapagos Islands and the Arctic Circle in search of photo opportunities.

The-Ozone depends on Dan for not only photos but his input on business matters as well. With his extensive corporate management experience he is an important contributor on strategic thinking and has hosted numerous business and staff meetings providing both professional guidance and a professional environment conducive to planning and decision making.

Dan and his wife have two children, both Ohio State graduates and both engineers. Both his children are rabid Ohio State fans.