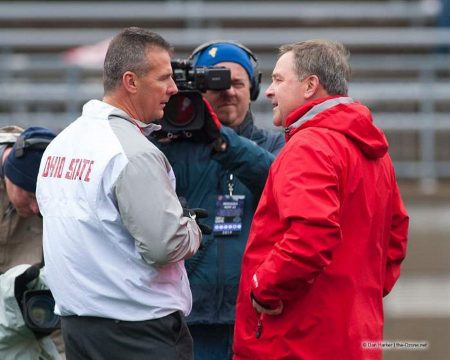 Kevin Wilson is in his first season as the Buckeyes’ offensive coordinator and tight ends coach. He was named to the position in January 2017. The former Indiana head coach, who has 16 years of coordinator experience, has directed some of the most innovative and prolific offenses in the nation over his 25-year coaching career.

Wilson spent six seasons as Indiana coach and led them to consecutive bowl games in 2015 and 2016 for the first time in 25 years. His teams were physical, and highly competitive against Ohio State – games decided by three, seven and 14 points twice – behind a productive passing attack that led the Big Ten Conference three times, in 2012, 2013 and 2015, while finishing second this year. His 2015 offense led the Big Ten in passing, total offense and scoring.

An offensive coordinator to the late Randy Walker for seven years at Miami (1992-98) and then for three years at Northwestern (1999-2001), Wilson and Walker led the RedHawks to a 59-36-5 record before devising a power-spread offense at Northwestern that carried the Wildcats to a Big Ten Conference co-championship in 2000. Highlights of that season included Northwestern leading the Big Ten in rushing for the first time in 54 years.

Wilson then coached under Bob Stoops for nine years at Oklahoma, serving as co-offensive coordinator from 2002-05 and offensive coordinator from 2006-10. During this time the Sooners won six Big 12 championships, played in three national championship games (2003, ’04 and ’08) and Wilson’s offenses “evolved into a beast,” according to published reports and featured a then-NCAA record 716 points scored in 2008 that still ranks No. 2 in FBS history.

Following the 2010 season, Wilson was named Indiana’s head coach. His tenure was not only an exciting offensive era for IU, but it also featured an average of 21 academic all-Big Ten players each year and was the second-longest tenure for an IU coach in the last 20 years, or since Bill Mallory’s 13-year run between 1984 and 1996.

Student-athletes, particularly running backs and quarterbacks, thrived under Wilson and the accomplishments of many of them are listed throughout the NCAA records pages and various conference media guides. Of note:

Miami Redhawk Travis Prentice rushed for 3,937 yards and 56 touchdowns in three seasons under Wilson, and he closed his career sixth in NCAA rushing history

Two of Wilson’s running backs – Northwestern’s Damien Anderson and Indiana’s Tevin Coleman – accumulated 2,000 rushing yards in a season with Coleman’s 2,036 in 2014 16th in NCAA history and Anderson’s 2,063 in 2000 not ranked by the NCAA because of bowl game yards but fifth in Big Ten history

Bradford and Oklahoma’s Landry Jones each passed for over 4,700 yards in a season to rank 21st and 23rd, respectively, in NCAA history

Wilson, a winner of the Frank Broyles Award in 2008 as the nation’s top assistant coach and twice a finalist, coached four first-round draft picks at Oklahoma – Bradford, Peterson, Trent Williams and Jermaine Gresham – and 23 of his Hoosiers moved on to the NFL.

A native of Maiden, N.C., Wilson is a 1984 graduate of the University of North Carolina, where he was an offensive lineman on the football team and received his bachelor’s (education; 1987) and master’s (physical education) degrees. His coaching career began in 1987 at Winston Salem State and includes stops at North Carolina A&T (1988) and Foard (N.C.) High School prior to his tenure at Miami.

Wilson, and his wife, Angela, are the parents of five children: daughters Elaina, Makenzie and Marlee, and sons Trey and Toby.