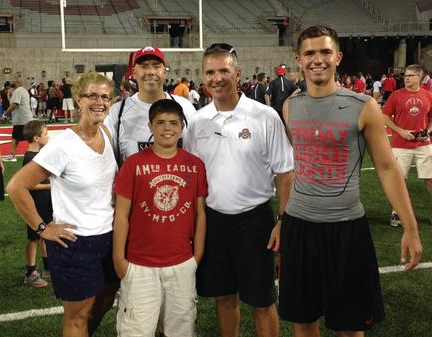 Blake Haubeil and his family with Urban Meyer
Vitals

Blake Haubeil is one of the top kickers, if not the top kicker, in this 2017 class of prospects with national rankings of No. 1 by 247Sports, No. 3 by Scout and No. 4 by Rivals … he was named to the USA Today all-USA first-team offense as a senior … named a USA Today first-team all-New York state pick in both 2015 and 2016 … a two-time first-team all-Western New York performer, Haubeil was 17-of-22 for his career in field goals with a long of 61 yards and he was 89-of-91 on extra points for a total of 119 points … his 61-yard field goal came during his junior season in a three-point win over Buffalo South Park and is the second-longest in New York state history … set a Monsignor Martin Athletic Association record by hitting 56-of-56 extra points as a senior, including six in the Crusaders’ state Catholic High School Association championship game win over Cardinal Hayes … hit six-of-nine field goals with a long of 56 yards in 2016 and 53 of his 76 kickoffs went for touchbacks … all-East Region by PrepStar … rated the No. 1 kicker coming out of the 2015 Kohl’s kicking camp … honorable mention all-state Class B at Amherst High School before transferring to Canisius for his final two seasons … is the son of Brooke and Rik Haubeil.