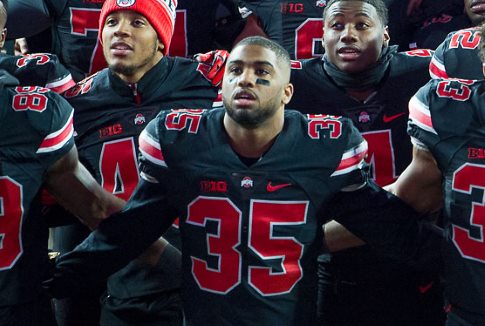 Chris Worley is ready for the middle
Vitals

2015 Season (Sophomore): Worley played in 12 games for the 12-1, Fiesta-Bowl champion Buckeyes … he was in on 17 tackles, including 1.5 tackles for losses totaling four yards … he registered his first quarterback sack in the win over Penn State … tied his personal bests with five tackles and four solo tackles in the win over Michigan.

2014 Season (Freshman): Worley played in 14 of 15 games for the College Football Playoff national champions and earned his first Varsity O letter … he earned a start in the first game he ever played in — the season opener vs. Navy — and played 52 snaps on defense while recording his personal best five tackles, four of those solo stops … he finished the season with 11 tackles with eight of those solos, and he also contributed on special teams in each of the games he played.

More on Chris: Worley was one of the final prospects in the Class of 2013 to commit to attending Ohio State, doing so on Jan. 11 … a special mention Associated Press all-state pick as a senior, Worley led Glenville, coached by Ted Ginn, to an 8-2 record his senior season by recording 89 tackles with nine sacks, five interception returns for touchdowns and five forced fumbles … for his career he had 161 tackles, 13 sacks, eight interceptions and seven forced fumbles … a Top 25 senior prospect in Ohio (No. 20 by 247Sports and No. 25 by ESPN) … Worley extended a streak of Glenville Tarblooders signing NLIs with Ohio State to 12 consecutive years … 22 Tarblooders have become Buckeyes since 2002, including five current members of the team and past greats like Super Bowl players Donte Whitner and Ted Ginn and 2006 Heisman Trophy winner Troy Smith … Worley is the son of Michelle Bandy and Chris Worley, Sr. … he has two older sisters, Chrishelle and Christine, an older brother, Eric Smith, and a younger brother, Cahlied.