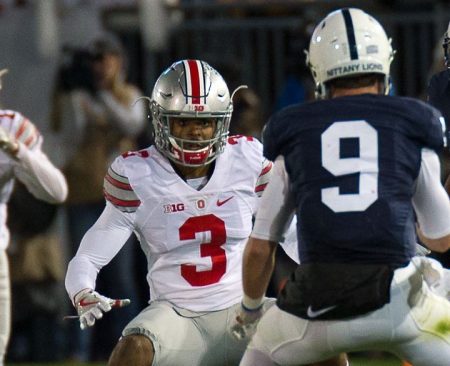 Damon Arnette is expected to start in 2017
Vitals

Damon Arnette is in his third season with the Buckeyes … he was the team’s No. 1 nickel back for much of 2016 … he redshirted the 2015 campaign as a true freshman and is majoring in communications … one of the last in this class to commit to attending Ohio State, Arnette carried a 4-star rating from ESPN and came from the strong St. Thomas Aquinas program … Aquinas, coached by Rocco Casullo, has captured two of the last three Florida 7A state championships, including in 2014 with a 15-1 record … Arnette provided length and strength as a roving defensive back with most of his time spent at cornerback … he was ranked as the No. 24 safety by ESPN and the No. 51 cornerback by Rivals … the 247Sports composite ranked him No. 60 at cornerback … he was ranked as the talent-rich Florida’s No. 83 prospect after recording three interceptions, five additional pass break-ups and three quarterback sacks as a senior … he earned honorable mention all-defensive team honors on Broward County’s Class 8A-7A-6A list.