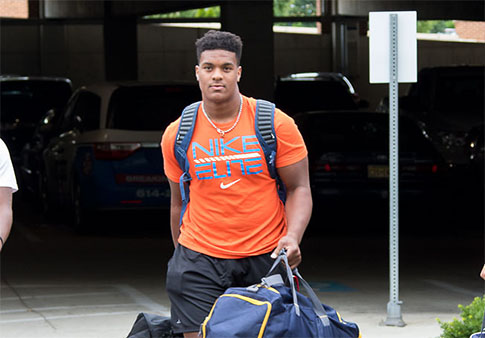 2016 Season (Redshirt Freshman): Sixth on the team with 47 tackles in his first season … became the full-time starter after Tracy Sprinke went down with a season-ending injury vs. Bowling Green … season-high seven tackles in the regular-season finale vs. Michigan … six tackles and 1.0 TFL vs. Northwestern … added a TFL and two tackles at Maryland … season-high eight tackles in the road win at No. 8 Wisconsin … recorded seven tackles vs. Indiana and five vs. Rutgers … three stops at Penn State.

Overview: Dre’Mont Jones red-shirted the 2015 season as a true freshman while he continued to recover and rehabilitate from a high school injury … he came to Ohio State after just two seasons of high school football behind him, but he had learned the game quickly: he was named first-team Division I Associated Press all-state as a senior for coach Chuck Kyle’s 6-4 team that advanced to the Ohio state playoffs … he also picked up all-Northeast Lakes District honors as a senior after recording 47 tackles, 21 tackles-for-losses and four sacks with four forced fumbles … Jones, who also played basketball at St. Ignatius, is considered a 4-star prospect by ESPN, Scout and 247Sports and he has overall rankings of No. 161 on the ESPN 300 and No. 169 by 247Sports … considered the No. 1 defensive line prospect in Ohio by Scout, Jones also had high positional rankings of No. 11 at strong side defensive end by 247Sports and Top 25 end status by both Scout and Rivals … a U.S. Army All-American … all-Midwest by PrepStar … parents are Schontina Jones and Sanderline Williams.