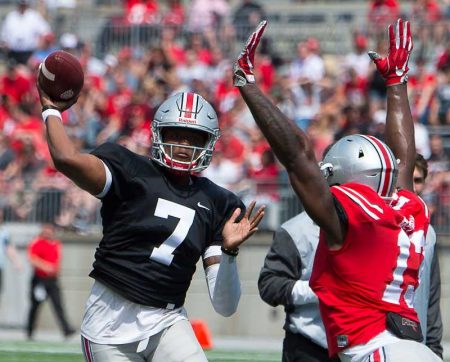 Dwayne Haskins is competing to be OSU’s backup QB
Vitals

Consensus 4-star prospect Dwayne Haskins (ESPN, Rivals, 247Sports, Scout) was highly regarded as a pure passer and a leader … the first-team consensus all-Maryland quarterback, who completed 170 of 286 passes this past year for 2,217 yards and 20 touchdowns, was rated among the Top 5 pro-style quarterbacks in this class, with ESPN ranking him No. 4 and Rivals No. 5 with 247Sports giving him its No. 7 rating … he was also listed among the Top 100 players overall, with ESPN listing him at No. 63 on its ESPN 300, 247Sports ranking him No. 87 and Rivals No. 100 on its Rivals 100 … the No. 122 player overall by Prepstar and a member of its Dream Team … earned Washington Post all-metro honors and Interstate Athletic Conference (IAC) player of the year honors as a senior … Haskins helped Bullis, coached by Pat Cilento, to consecutive IAC titles as a sophomore and junior … he threw for 1,963 yards and 24 touchdowns as a junior and was named the Maryland Gatorade player of the year … career-wise, he threw for 5,308 yards and 54 touchdowns … named to the Under Armour All-American game … Haskins is originally from New Jersey, but moved to Maryland in the ninth grade … he is the son of Tamara and Dwayne Haskins Sr.