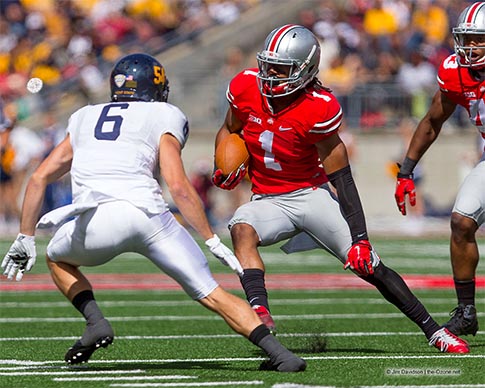 Erick Smith is competing for a starting safety spot
Vitals

2015 Season (Sophomore): Smith played in the first five games of the season before injuring his knee and missing the remainder of the season … he totaled 88 plays, or an average of just under 18 per game … most of his action came on special teams … totaled six tackles on the year.

2014 Season (Freshman): Smith played in 14 of 15 games for the College Football Playoff national champions … his play was mostly on special teams, but he did have a couple of extensive stints on defense: 18 snaps against Kent State and 31 vs. Illinois … was on multiple special teams by the time the season ended and totaled a combined 41 plays in the post-season wins over Wisconsin, Alabama and Oregon … recorded 13 tackles on the season and one interception, vs. Kent State.

More on Erick: Another fine safety prospect out of the talent-rich Glenville High School program (think former Buckeyes like Christian Bryant, Jermale Hines and Donte Whitner), Erick Smith was a consensus four-star recruit in 2014 and a Top 100 player in the nation with overall national rankings of No. 43 by Scout, No. 51 by Rivals and No. 61 by 247Sports … one of the leaders of a 2013 Glenville Tarblooder team that went 13-2 and advanced to the Division II state championship game … considered a Top 5 safety prospect by two recruiting services: No. 2 by 247Sports, No. 4 by Scout … rated the No. 11 safety by ESPN … No. 2 ranked player in Ohio by Scout … had 10 tackles and forced a fumble in the state title game and had a “pick six” in the state semifinals … a U.S. Army All-American and a third-team Division II Associated Press all-state pick … is the son of Erica and Curtis Smith.