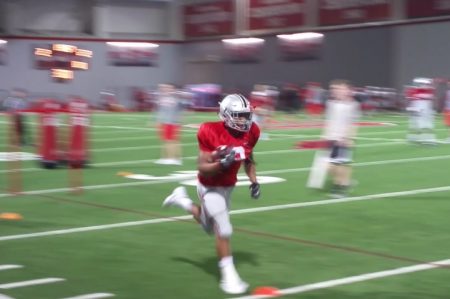 J.K. Dobbins will compete to be the backup in 2017
Vitals

U.S. Army All-American J.K. Dobbins committed to Ohio State before seeing the campus, a credit to those on Ohio State’s staff who recruited him and because Ohio State competes for championships … Dobbins missed all but one play of his senior season after breaking a bone in his right leg, but 5,149 rushing yards and 74 touchdowns during his first three seasons for coach Matt Kates carried him to consensus 4-star recognition and Top 50 status nationally among all players in this class (No. 43 overall by 247Sports and No. 44 by ESPN) … he was rated among the Top 5 running backs in the nation, including the No. 2 all-purpose back by 247Sports … this summer he was the Nike+ football rating champion at The Opening in Beaverton, Ore. … finishing second was another Texas and Ohio State recruit: Jeffrey Okudah … statistically, Dobbins had 2,740 rushing yards and 35 touchdowns as a junior and 2,243 yards and 37 TDs as a sophomore in 2014 … he was named Class 4A all-state in 2015 by both the Texas Sports Writers Association and the Associated Press … he helped La Grange to two state playoff appearances approximately two decades after his late father, Lawrence Dobbins, played on La Grange’s 1997 state semifinalist team … his mother is Mya Grounds.