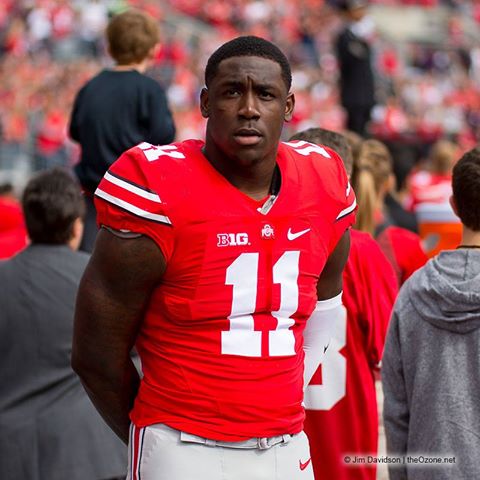 Jalyn Holmes is looking to go 4-0 against Michigan
Vitals

2015 Season (Sophomore): Holmes played in all 13 games and was credited with 11 tackles, including a career-best six in the season-opening win over Virginia Tech … he also played a career-high 31 snaps on defense against the Hokies … had 22 defensive snaps in the Fiesta Bowl win over Notre Dame … also contributed on special teams for the first half of the season.

2014 Season (Freshman): Holmes played in 11 games for the Buckeyes with the vast majority of his playing time along the defensive line, although he did play on some special team’s units in six games … played a personal-best 27 snaps on defense in the win over Illinois … had action in both the Big Ten championship game win over Wisconsin and the national championship game win over Oregon … recorded 11 tackles on the year, including five vs. Kent State, and one tackle-for-loss.

More on Jalyn: Holmes was a consensus four-star prospect and considered one of the premier defensive linemen in the nation … registering 59 tackles-for-loss including 21 sacks his last two seasons for Lake Taylor High School, Holmes was ranked as high as the No. 4 weak-side defensive end by both Rivals and 247Sports and the No. 13 defensive end, overall, by Scout … among the Top 100 players nationally according to 247Sports (No. 51) and Rivals (No. 55) … ranked on the ESPN 300 (166) … he helped Lake Taylor, under coach Hank Sawyer, to a 10-3 record in 2013 and reach the semifinals of the Virginia 4A state playoffs … named all-state as a senior by VirginiaPrep.com with 48 tackles, 19 TFLs and 10 sacks … helped Lake Taylor win its first Virginia 4A state championship in 2012 – capping a 15-0 season – with 79 tackles, including 40 tackles for loss and 11 sacks … named Division III first-team all-state as a tight end (24-351-7) in 2012 … attended Nike’s The Opening in Beaverton, Ore., after his junior season … played in the U.S. Army All-America Bowl after his senior season … is the son of Tasha Holmes.