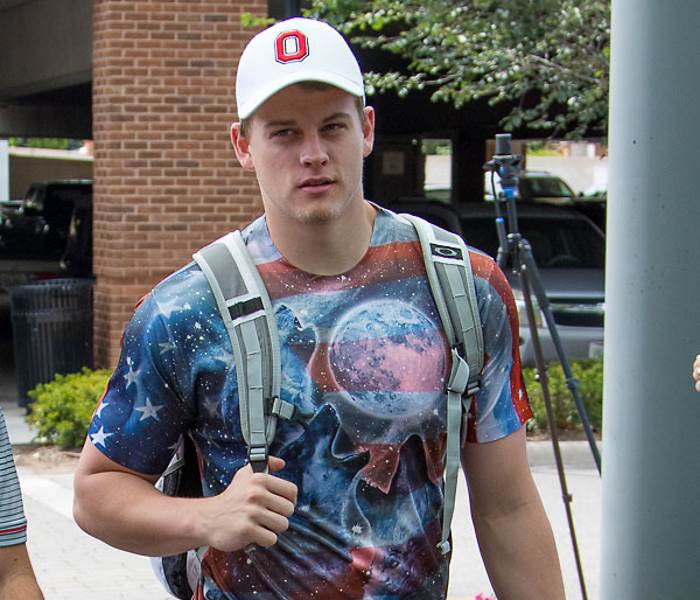 Joe Burrow and his t-shirt
Vitals

Joe Burrow played in six games in 2016 as a redshirt sophomore, completing 22-of-28 passes for 226 yards and two touchdowns … after red-shirting the 2015 season as a true freshman he took the majority of the snaps at No. 2 the first part of spring drills in 2016 and then all of them once Stephen Collier was injured and lost for the season … Burrow spent three days interning at Goldman Sachs in NYC this summer … he was the third player to commit to Ohio State’s class of 2015 recruits … a 4-star prospect by ESPN, Scout and 247Sports, he led coach Ryan Adams’ Athens H.S. teams to three consecutive state playoff appearances (2012-14) and to all seven of the state playoff wins in school history … his 2014 team was state runner-up in Division III and Burrow was selected as Ohio Mr. Football, first-team Associated Press all-state and the Division III co-offensive player of the year after throwing for nearly 4,500 yards with 63 touchdowns and only two interceptions … threw for over 11,400 yards with 157 touchdowns in his career plus rushed for over 2,000 yards with 27 more TDs … ranked on the ESPN 300 (298) and a Top 25 quarterback by Scout (13) and Rivals (25) … named the 2013 Ohio Gatorade player of the year and AP all-state … is the son of Robin and Jimmy Burrow … father is in his 12th season as the defensive coordinator at Ohio University under Frank Solich … father and older brothers, Jamie and Dan, all played football at Nebraska and lettered.