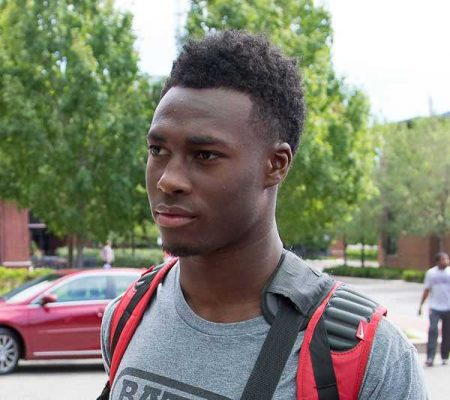 Jordan Fuller will compete for a starting spot in 2017
Vitals

Jordan Fuller played in 12 games as a true freshman in 2016, tallying 11 tackles, mostly on special teams.

Fuller, the Gatorade New Jersey player of the year and the NJ.com player of the year as a senior, was a 4-star prospect (ESPN, Scout, 247Sports) and one of the outstanding athletes in this class … he was rated as high as the No. 2 athlete nationally by 247Sports and ESPN ranking him No. 9, with Scout ranking him in the Top 10 (No. 9) at cornerback … he was also rated as high as the No. 41 overall player (247Sports) with Scout ranking him No. 127 and with a 151 ranking on the ESPN 300 … a member of the PrepStar Dream Team … Fuller helped Old Tappan, coached by Brian Dunn, to a record of 29-5 between 2013-15, including a 12-0 season in 2015 when the Golden Knights won their first state title in 30 years … Fuller led the way with 747 rushing yards and 10 touchdowns; 33 receptions for 886 yards and five touchdowns; 44 tackles, six interceptions and 135 passing yards … he had 646 rushing yards and five touchdowns as a junior in addition to 15 receptions and 53 tackles … his career numbers included 30 touchdowns with two of those scores off interception returns and two off punt returns … played in the U.S. Army All-American Bowl and attended The Opening in Beaverton, Ore., in Summer 2015 … reportedly received his first scholarship offer in eighth grade … is the son of Cindy Mizelle and Bart Fuller … Mom is a highly regarded professional back-up singer who has performed with true greats in the music industry, including Mariah Carey, Barbara Streisand, Whitney Houston, Luther Vandross, the Rolling Stones, Bruce Springsteen and Alicia Keys, to name but a few… father played football at TCU … brother, Devin, recently completed a fine collegiate football career at UCLA and was drafted by the Atlanta Falcons … also has one sister, Jasmine.