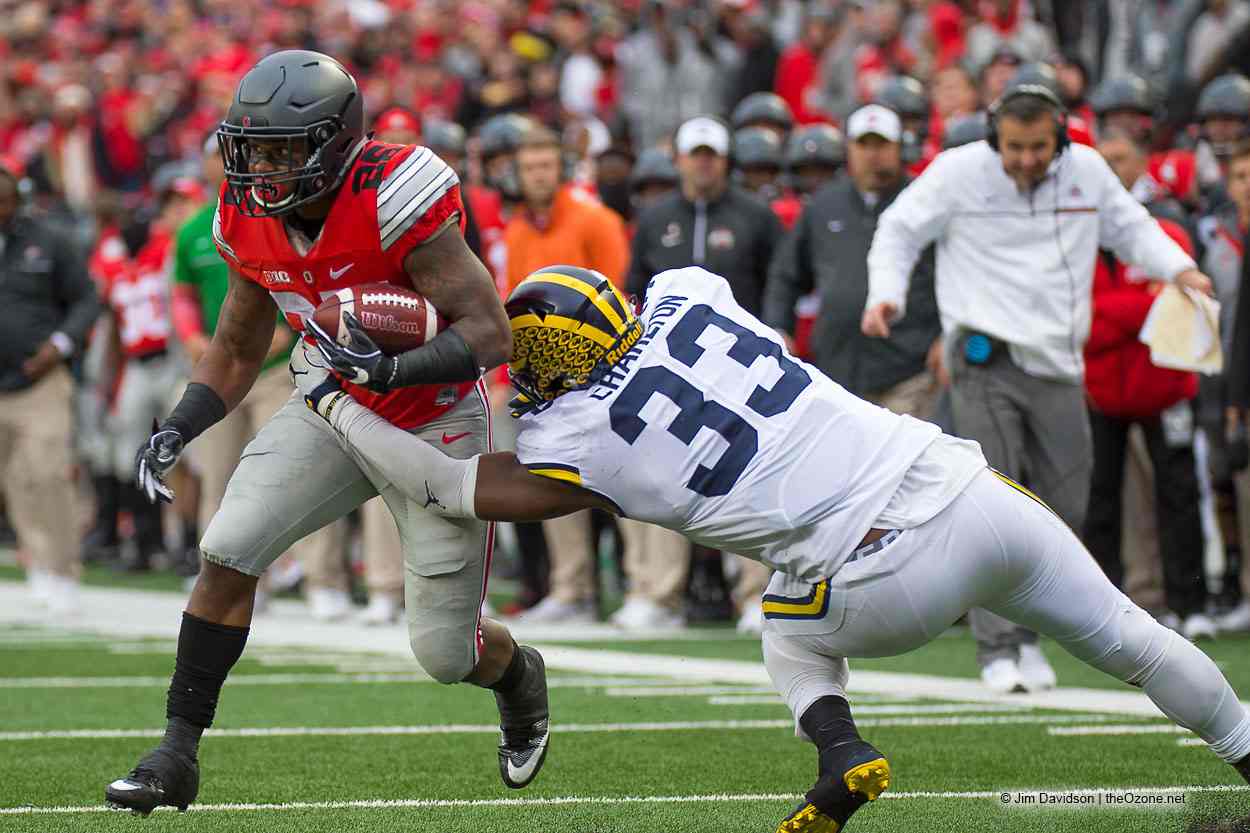 2016 Season (Freshman): Thompson-Randle El Big Ten Freshman of the Year … second team All-Big Ten by the coache and the media … USA Today Freshman All-America … became the third Ohio State freshman to rush for over 1,000 yards in a season, joining Robert Smith (1990) and Maurice Clarett (2002) … rushed 177 times for 1,072 yards and led all freshmen in the Big Ten with 89.3 rushing yards per contest … racked up a career-best 144 yards on the ground against Rutgers, including one score … had two rushing touchdowns each against Indiana and Northwestern and he rattled off 111 yards on 14 carries in a 17-16 win on the road at Michigan State, including one score and a career-long rush of 52 yards … garnered Big Ten Freshman of the Week honors twice during his first season … rushed for 71 yards and had a 23-yard TD rush in the win over No. 10 Nebraska … rushed for 136 yards on 19 carries in his first career game and start in the win over Bowling Green … scored his first career touchdown while rushing for 92 yards in the win over Tulsa … rushed for 123 yards on 18 carries in the win at Oklahoma.

Overview: Mike Weber red-shirted the 2015 season as a true freshman … he came through the 2016 spring drills in an even battle with fifth-year senior Bri’onte Dunn for the starting running back position that opened up when No. 4 overall pick of the 2016 NFL Draft Ezekiel Elliott elected to turn pro after his junior year … Weber came to Ohio State a consensus 4-star prospect who rushed for 2,268 yards and 29 touchdowns as a senior in 2014 despite missing three games for coach Thomas Wilcher’s state semifinalist squad … Weber was so good – he averaged 10.1 yards per carry – that Wilcher called him the best back in the Detroit Public School League in the last 30 years … was considered a Top 100 player nationally, with high overall rankings of No. 69 by Scout, No. 71 by Rivals, No. 80 by 247Sports and with a 140 rank on the ESPN 300 … considered the No. 1 player in the state of Michigan (Scout) and considered a Top 10 running back nationally by Rivals (No. 8), Scout (No. 9) and 247Sports (No. 9) … a first-team Associated Press all-state honoree as a senior and was twice named the Proud Strong Learner of the Week in the DPSL … rushed for a state record 404 yards and five touchdowns in a regional championship win over Clinton Township Chippewa Valley … rushed for 890 yards and 13 touchdowns in Cass Tech’s four-game run through the state playoffs in 2014 … a finalist for the Michigan state player of the year award and a co-recipient of the Detroit player of the year award … a U.S. Army All-American … parents are Toni and Mike Weber Sr.