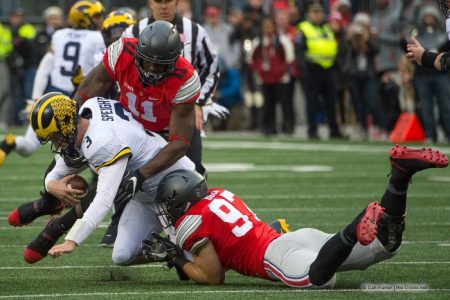 2016 Season (Freshman): Has made an immediate impact in his first season in a reserve role … has eight games with multiple tackles, including three with four … 7.5 TFL and 4.0 sacks on the season, including one in the 2OT win over Michigan … four solo tackles and 1.5 TFL in the win over Indiana.

Overview: Nick Bosa was a consensus 5-star prospect nationally by ESPN, Rivals, 247Sports and Scout, and one of the Top 10 overall prospects in this recruiting class with ESPN ranking him No. 3 on its 300, Scout ranking him No. 5 and 247Sports No. 8 … the No. 6 player overall by Prepstar and a member of its Dream Team … also a near-unanimous No. 1 defensive end prospect with ESPN, Scout and 247Sports ranking him No. 1, and Rivals has him No. 2 at the strong side end position … Bosa was first-team 7A all-state as a sophomore and junior and certainly would have been as a senior had he not been injured in game No. 8 and missed the rest of the season … a four-year starter for Aquinas teams that won 7A state championships in 2012 and 2014 under Rocco Casullo and in 2015 under Roger Harriott … recorded 56 tackles, 29.5 tackles-for-loss and five quarterback sacks as a junior in 2014 and had 21, 13.5 and five, respectively, before his injury in 2015 … an Under Armour All-American … is the brother of Ohio State’s two-time consensus All-American and two-time Big Ten defensive lineman of the year Joey Bosa, the third overall pick in the 2016 NFL Draft by San Diego …. parents are Cheryl and John Bosa … father was a first-round NFL Draft pick out of Boston College in 1987 by the Miami Dolphins and played three years in the league … uncle, Erik Kumerow, was Ohio State captain in 1987, a two-time all-Big Ten performer and a 1988 NFL first-round draft pick.