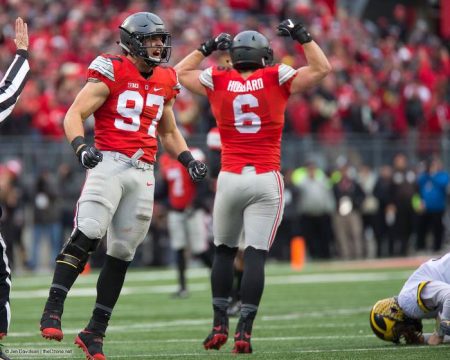 2015 Season (Freshman): Hubbard was named a freshman All-American by USA Today … he earned the start in the season opener against Virginia Tech and was a key back-up in the final 12 games for the 12-1 Buckeyes … he was in on 414 plays as a freshman with 333 on defense plus an additional 81 on special teams … recorded 28 tackles, including eight tackles-for-losses totaling 44 yards plus 6.5 quarterback sacks … he also recorded an interception (vs. Maryland), a pass break-up, three quarterback pressures, a forced fumble and had two fumble recoveries … was in on a career-high four tackles three times: vs. Virginia Tech, Western Michigan and Notre Dame … also had a career-high 55 snaps in the win over Notre Dame in the Fiesta Bowl.

Sam Hubbard is a rising star for the Buckeyes and is coming off a freshman All-America campaign in 2015 … Hubbard, first noticed at Moeller High School by coach Urban Meyer playing dodgeball, came to Ohio State as a safety but coaches experimented with him at tight end and linebacker during a red-shirt freshman campaign in 2014 … he ultimately settled in nicely along the defensive line … he’s done well off the playing field as well with two OSU Scholar-Athlete honors and one Academic All-Big Ten honor while pursuing his degree in finance … spent three days this summer interning with Goldman Sachs in New York City.

More on Sam: Hubbard was a first-team Associated Press Division I all-state safety in 2013 and was rated by Scout as the No. 1 player in the state of Ohio and a five-star recruit … Scout ranked him the No. 2 OLB prospect in the nation while Rivals and ESPN rated him No. 37 and No. 43, respectively … also highly rated overall nationally by Scout (No. 29) and Rivals (No. 124) and as the No. 9 athlete by 247Sports … Hubbard led Archbishop Moeller to consecutive Division I state championships as a junior and senior … he recorded 109 tackles and five interceptions as a senior, including a 10-tackle performance against Mentor in the 2013 state title game to cap a 14-1 season … also had a fumble recovery, interception and blocked extra point vs. Mentor … all five of his 2013 interceptions came in the state playoffs, including two vs. St. Xavier … Hubbard had 75 tackles and two interceptions for Moeller’s 2012 state champion team that finished 12-3 … is an outstanding lacrosse player, as well, who considered playing college lacrosse before choosing to be a Buckeye … is the son of Amy and Jim Hubbard.