COLUMBUS — For the second time in as many games, the Ohio State Buckeyes (5-3) had a double-digit lead on a team in the second half and could not hold on for the win.

On Sunday it was a 15-point lead to Butler that disintegrated in the game’s final minutes, and Wednesday night it was an 11-point lead against Clemson (6-1) that turned into a 79-65 win for the Tigers.

Clemson had an eight-point lead with 8:02 remaining in the game, but the Buckeyes answered with a 5-0 run to get things back down to one possession. The run was short-lived as Keita Bates-Diop missed a pair of free throws and had a pass thrown between his legs for a turnover on consecutive possessions. The Tigers converted on each miscue with points, building their lead back up to nine points at 70-61.

As it would turn out, almost no second-half lead would have been safe for the Buckeyes because they were outscored 49-28 in the second half by Clemson.

“I think we took a step back today,” Buckeye head coach Chris Holtmann said after the game. “I didn’t think that we handled adversity very well, or were as connected as we needed to be. We let our frustration get the best of us, so I think we definitely took a step backwards when it comes to that today. We have to respond better to runs and I’m going to have to continue to coach that better.”

Ohio State was led by forward Keita Bates-Diop with 21 points and seven rebounds, but he was just 7-of-18 from the field, with plenty of forced shots when the game was no longer in reach.

Freshman center Kaleb Wesson added 15 points in getting the start for injured center Micah Potter, who should be able to play this Saturday following recovery from an ankle injury.

Clemson G Marcquise Reed. Reed led all scorers with 22 points, but he also added seven rebounds and two steals. He scored 14 of his 22 points in the second half, including 3-of-4 three-point attempts. He closed out the final 8:02 of the game with eight points, eliminating any hope the Buckeyes had of a comeback.

Ohio State shot from three pretty well (9-21), but they couldn’t keep up with their first-half pace of 8-15. Holtmann even told his team at the half that they shouldn’t expect to hit eight threes in the second half and that they would need to move the ball more. That ball movement suffered when Clemson went to a zone defense throughout the game, which continues to be an area where Holtmann said the Buckeyes need to continue to improve.

“It’s hard. It’s hard. It’s hard for sure. I’ve got to probably… I’m not very good at that. I’m not very good at being patient. I’m certainly not good at handling this kind of stuff. So I think our players probably need to see me in a way handle that better. I just think overall I expected our effort defensively — I thought we did some good things sharing the ball — but I just expected our defensive effort to be better. I’m not saying we want to foul, but when you have one or two fouls with 30 seconds to go in the first half, that speaks to your overall activity. When you have less than five deflections going into the last 4-minute media (timeout) in the first half, that says something about our activity. That’s not good enough against a team like this.” — Ohio State head coach Chris Holtmann on managing expectations this season. 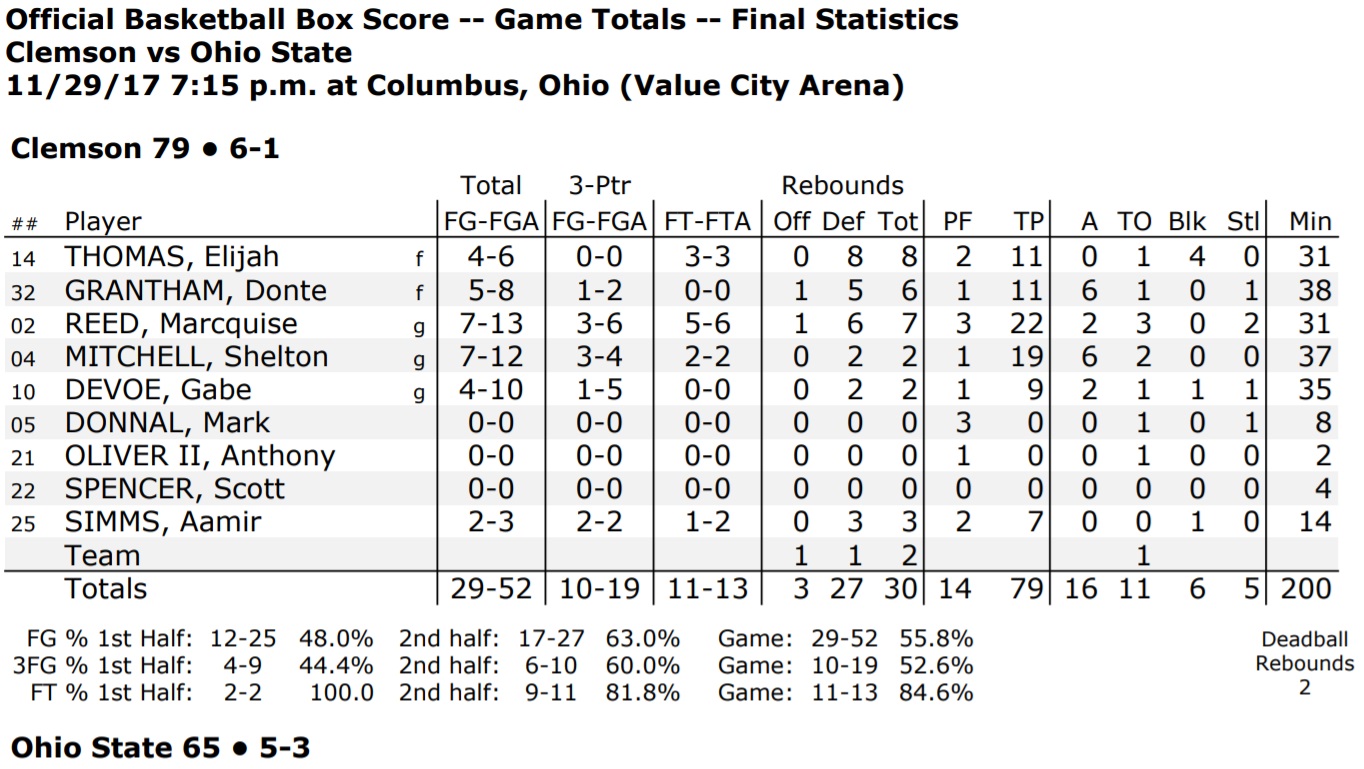 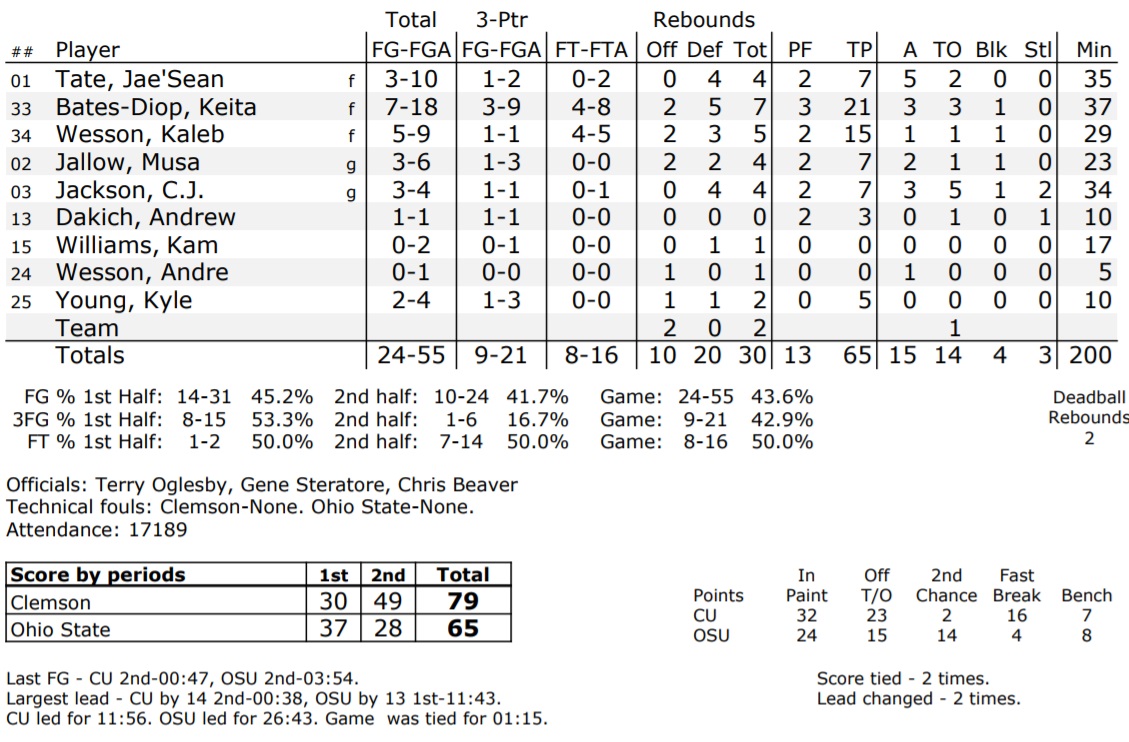 • Ohio State is now 6-10 in the Big Ten/ACC Challenge and 4-4 at Value City Arena in the Big Ten/ACC Challenge.
• This is the second meeting between Ohio State and Clemson. The Tigers hold a 2-0 record over the Buckeyes.
• The Buckeyes are 67-48 all-time against the ACC.
• With nine made 3-pointers, the Buckeyes tied the season high.
• Their 42.9% (9-21) also matched a season-high for 3-point percentage
• Chris Holtmann is now 0-2 against Clemson for his career and 5-3 as head coach of the Buckeyes.
• Keita Bates-Diop led the Buckeyes with 21 points and seven rebounds.
• Bates-Diop dished a season high of three assists.
• With seven rebounds, Bates-Diop has passed the 400 mark for his career. He now has 404 rebounds in his career.
• Kaleb Wesson netted a season-high 15 points.
• Wesson recorded his first career steal and 3-pointer.
• Kyle Young scored a career-high five points and scored his first 3-pointer for the Buckeyes.