(Ohio State defensive ends Jalyn Holmes and Tyquan Lewis are the only two Buckeyes playing in the Senior Bowl this year despite invites to others. Kyle Morgan from No Huddle Scouts was on-site this week at practices. Rather than some player breakdowns of guys you know, here is a behind-the-scenes look at what the week is like for the players. — Ed.)

Many reporters and news outlets embark on Mobile, Alabama each year to cover the Senior Bowl, an event where some of the nation’s elite NFL prospects are provided an opportunity to showcase their talents in front of scouts, GMs, and coaches from every team in the NFL and CFL.

While the game has the word “Bowl” in it, make no mistake, this is not a traditional bowl trip by any stretch of the imagination. I was able to spend a few days deep within the inner workings surrounding the event to uncover some of the rigors of what the players are being put through in arguably their most important week of football to date.

Arrival
Players began to trickle in Sunday afternoon. In fact, I had a number of players on my connecting flight out of Houston, including Kalen Ballage, Mason Rudolph, Luke Falk, Dallas Goedert, Mike Gesicki, and Mike McCray. Those were the guys I recognized at least. Many were flying in from their various training centers where their agents have had them preparing for the Draft. Some were accompanied by their agent, others were flying alone, but everybody was uneasy about the small plane during the 58-minute flight to Mobile.

Players were greeted by Senior Bowl staff and provided their credentials for the week. Their gear had already been sent by their school’s equipment department, so it was a quick departure to the hotel headquarters where they were issued Reese’s Senior Bowl gear and a healthy supply of Reese’s Cups to snack on.

Seminars
Once a majority of the players had arrived they were addressed by Phil Savage, Director of the Senior Bowl, and former GM of the Cleveland Browns. Phil likely provided them with an outline of the week, what they could expect to encounter and how they are expected to act. I’m sure there were more important details provided but I was behind the rope that said “restricted area” with a rather large police officer nearby.

Some other seminars provided to the players included financial management advice as well as tips on how to engage the media.

Interviews
The primary location for the week’s activities were split between the conference center of the hotel and the convention center across the street. As players milled around the 2nd floor of the hotel, they were constantly being pulled aside by representatives of each team. These initial interviews were key as players were relatively “fresh” and willing to divulge information on their background to respective scouts. The framework was being established by the scouting departments and key players needed to be interviewed before the brass of the NFL arrived the next day.

The scene was bizarre as members from one team would be escorting a player to a quiet space while another team would try and pluck them away. I witnessed one team nearly miss out on an interview because they had gotten on the escalator in front of the player while a swooping team had stopped the prospect to engage in conversation. The poor scouting assistant looked baffled as he rode the escalator down by himself before turning around and running up the stairs to salvage the interview. A few of the players I had spoken to stated they hadn’t had an opportunity to eat for a number of hours. It was a meat market, and it was only the beginning.

The Tale Of The Tape
The interview process lasted well past midnight, but players were expected to weigh-in at 7:30AM the following morning. This event took place in the Convention Center and it simulated a UFC weigh-in, minus the beer models. The entire NFL was present by now and I legitimately felt bad for the players. These poor guys had to walk out on stage one at a time wearing only their compression shorts to be measured and weighed. Scouts were interested in body type and official measurements, as many media guide measurables were found to be way off. Shocker. After nearly 3 hours of this parade, players were made available to media before getting ready for practice.

Practice
The teams selected to coach the Senior Bowl, in this case the Broncos and Texans, are said to have an immense advantage heading into the Draft. These coaching staffs and front office personnel have much more access to the players and are the only teams allowed to eat in the “cafeteria” with the prospects. Scouts from these teams will conduct interviews during these times, as well as private practices such as walk-throughs and film sessions. They can get a much better feel for how a player learns and applies teaching in this setting.

Once the official practices start, the stadium becomes a who’s-who of the Football world. Owners, General Managers, college coaches and former players fill the stands to reconnect with old friends. Brady Hoke was there too, likely looking for a place to work for the next few years.

On the field, the teams are able to install some of their own plays and get coached up by some of the best in the business while they go through position drills before scrimmaging. Many of these players are asked to play different positions than where they are comfortable to see how they react and to gauge the true depth of their skill set.

After practice, scouts are allowed onto the field where they can interview the players some more. In case you were still searching for a theme of the week, it’s interviews.

Film Review
Next to the circus that becomes the 2nd floor conference room and past “radio row,” sits a dark film room with six projectors and a few other laptops to study film. Provided for teams is footage from every rep of every prospect from every angle at the click of a button. Scouts are assigned position groups to focus on during the week, but everybody from ESPN’s Todd McShay and NFL Network’s Mike Mayock to Assistant GMs frequent the room at some point during the day to get a closer look at the nuances they covet. The film room is available from roughly 8am to around 11pm to accommodate everybody.

The Hustle
While players are being whisked away to various meetings, their agents are working the room as well, talking to anybody that will listen about how good their prospect looked at practice and what round they are expected to be selected. I stumbled upon Drew Rosenhaus discussing his client to a high level member of a front office. The meat market vibe continues.

As if these players don’t have enough on their table already, representatives from various products are trying to secure endorsement deals by making their sales pitch right there in the lobby. Players are usually scooped by a team before too long and taken to a dark corner of the room for another interview. Some are taken off site to other team hotels for more in-depth and formal interviews with high ranking members of the front office. Also, while all of this is going on, folks looking for jobs are trying to network with anybody they can share a handshake with.

Before you know it, it’s past midnight again and a few players trickle in with meals to take up to their rooms before the circus starts all over again. Another 18-20 hour day awaits for a chance to prove their worth to the NFL.

For the most part, players appeared to enjoy the process. The amount of enthusiasm regarding interviews dwindles as the days go on, so I can see why teams are so focused on getting those knocked out as soon as possible. The players know this is the most important interview of their lives, until the Combine, but many of the relationships that will advance their careers are established here in Mobile during the whirlwind week that is the Senior Bowl. 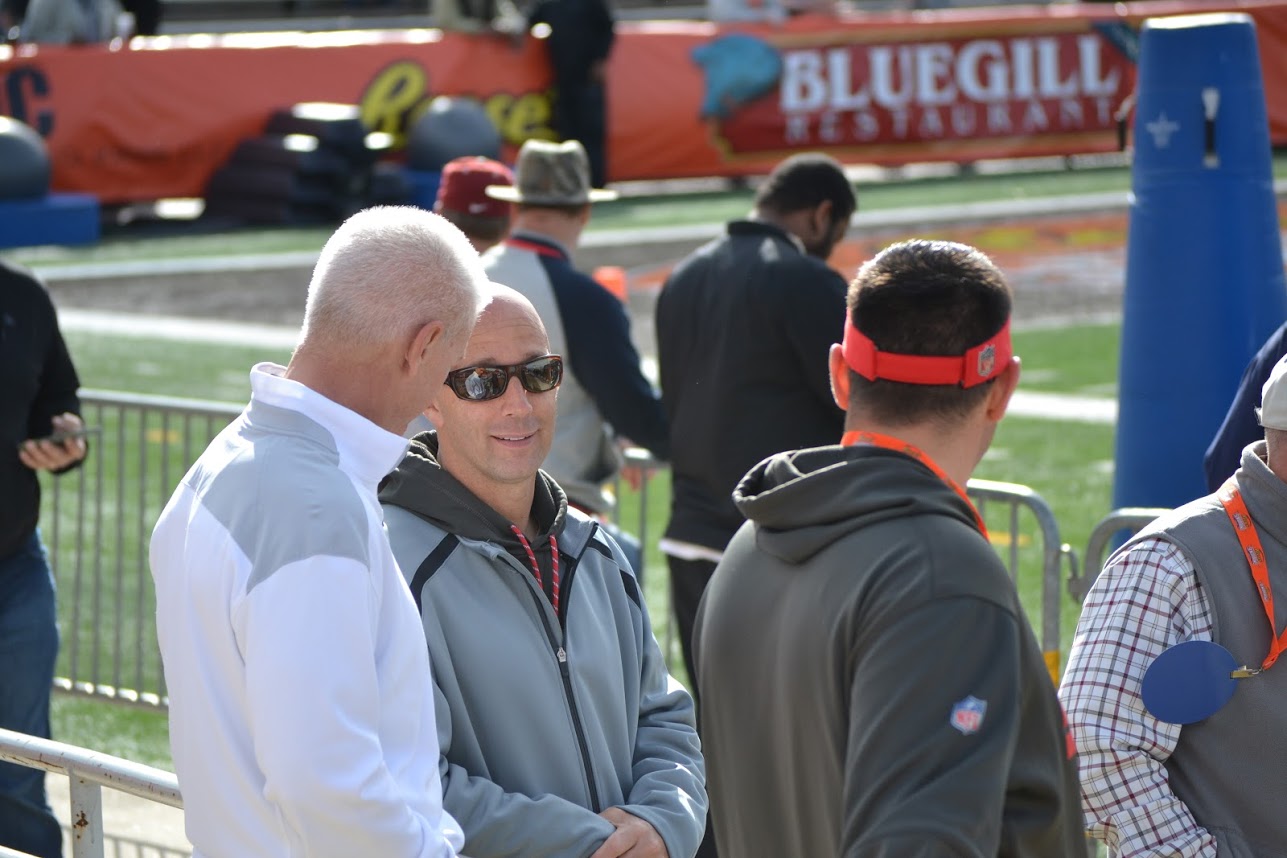 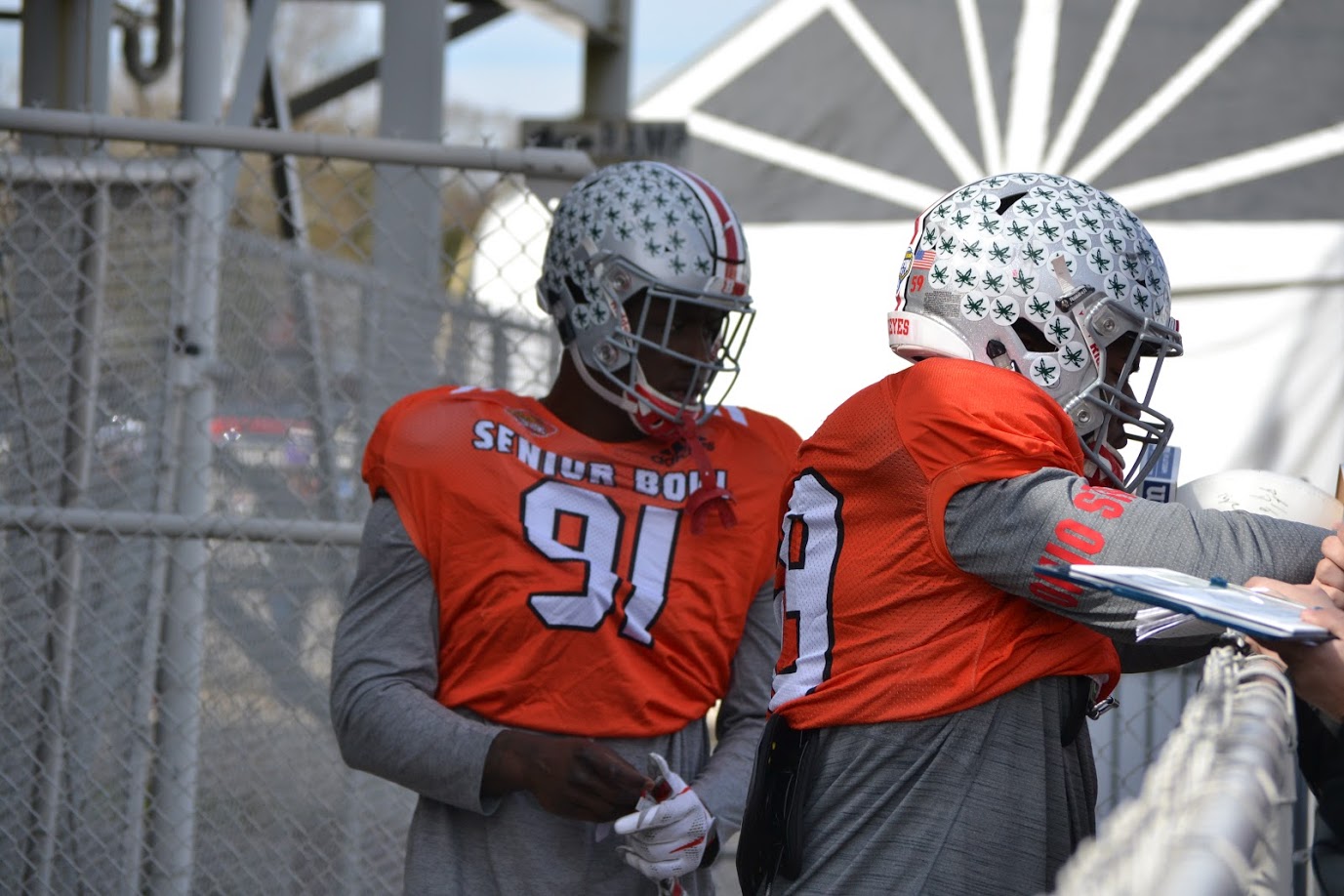 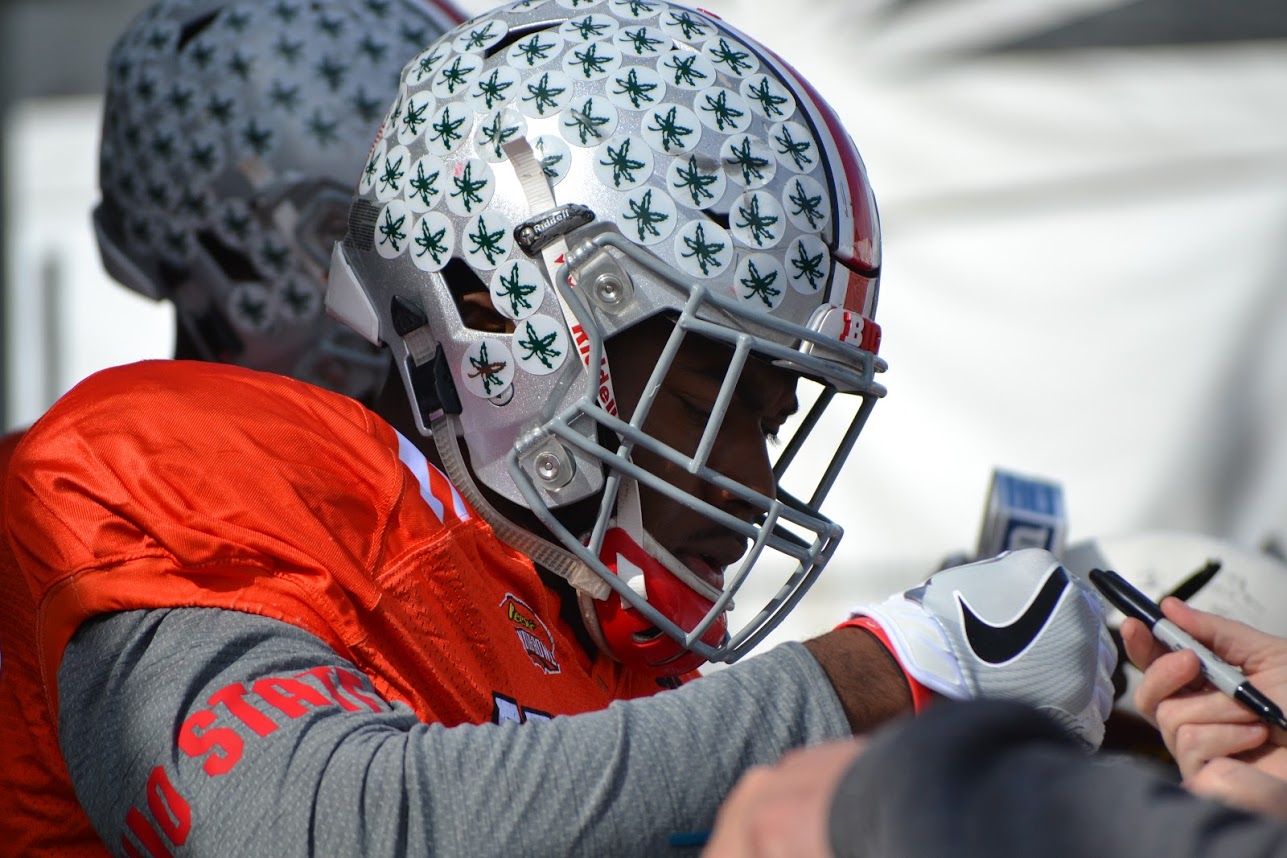 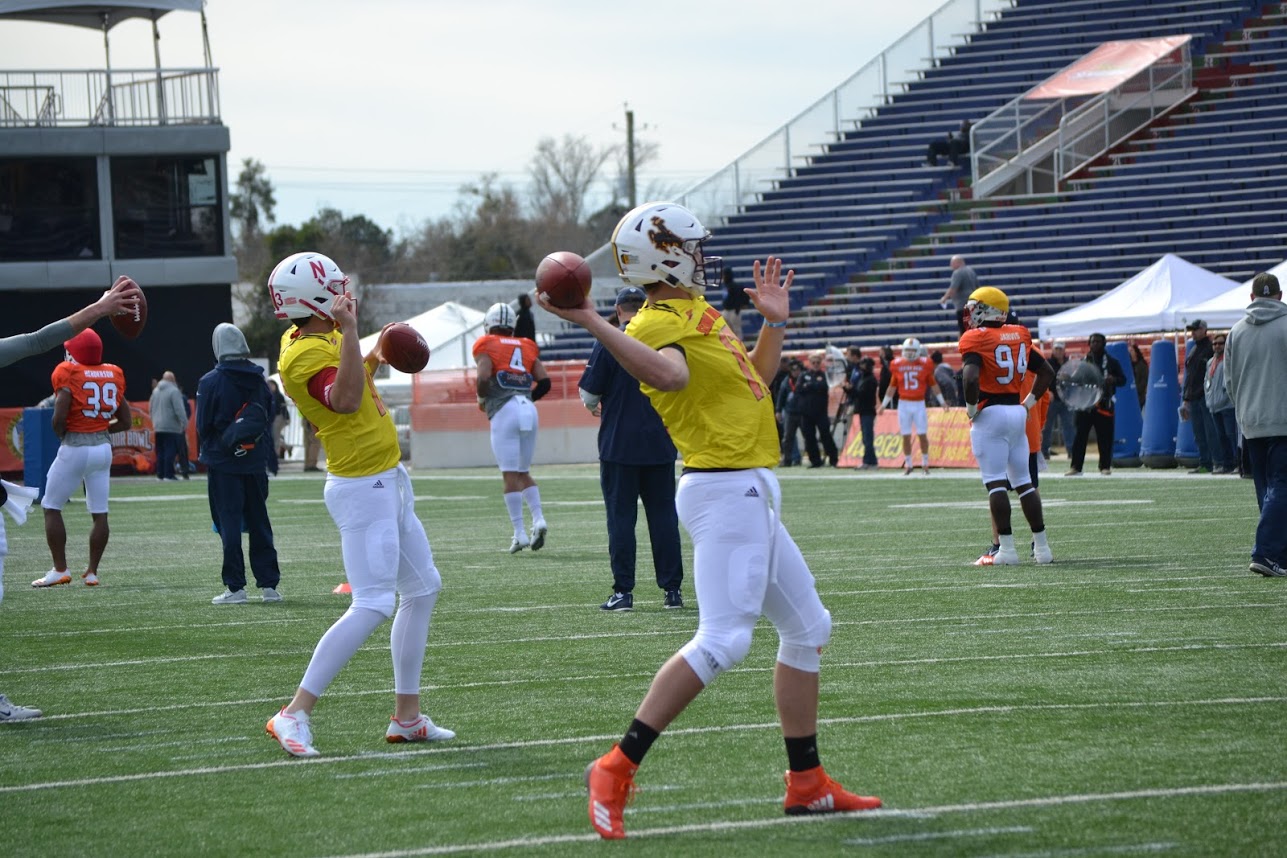 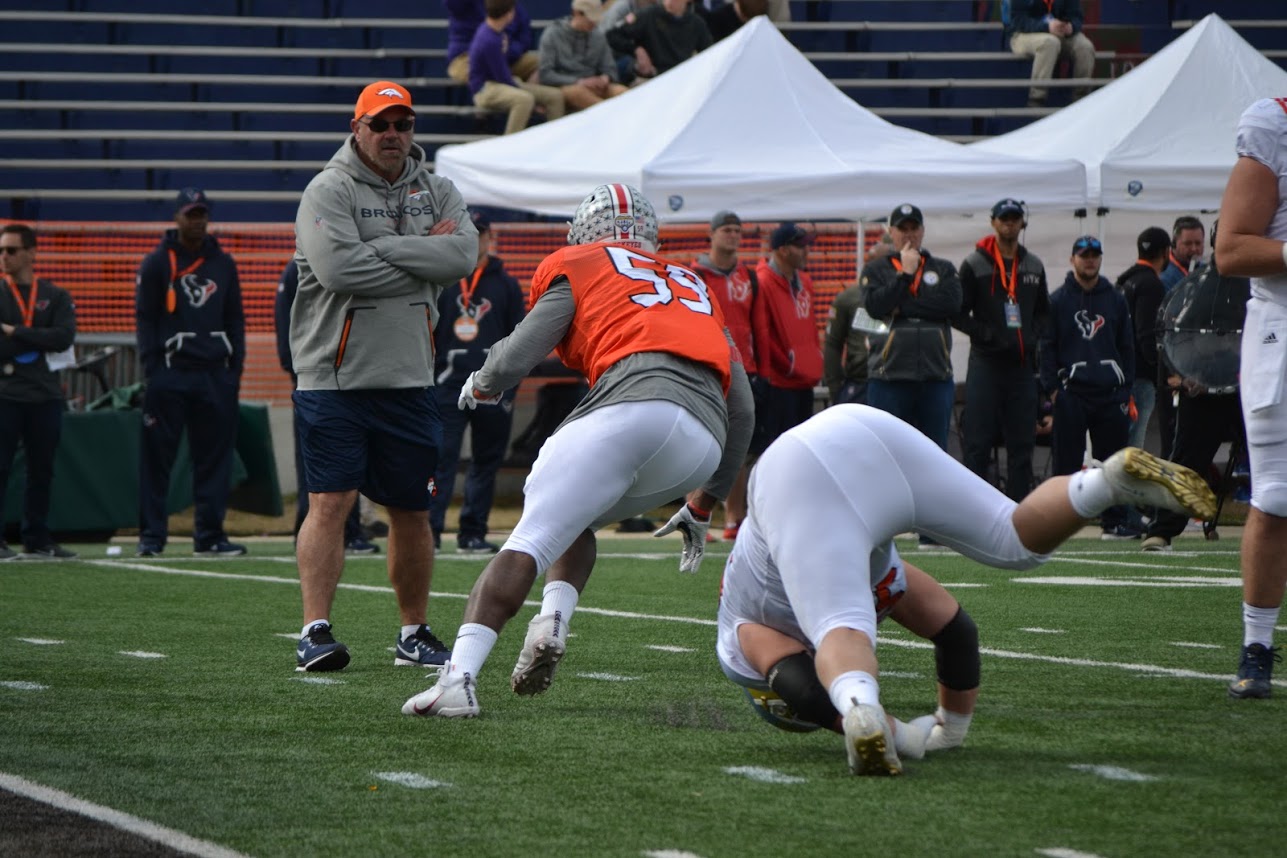