Ohio State got a tip in from junior forward Keita Bates-Diop with 2.8 seconds left to give the No. 14 Buckeyes (21-5, 12-1) a one-point lead, and a length-of-the-court pass to Purdue center Isaac Haas was caught just feet from the basket, but Haas’ fade away shot fell short at the buzzer and OSU came away with an improbable 64-63 win over the No. 3 Boilermakers (23-3, 12-1) at Mackey Arena Wednesday night.

The win puts the Buckeyes into a first-place tie with Purdue, but by virtue of their win over the Boilermakers, they are essentially alone at the top of the conference standings with five games to play.

Ohio State came into the game with starting guard Kam Williams continuing to serve an indefinite suspension, and once again it was sophomore Andre Wesson who stepped in for him. And it was a good thing, too. Wesson had a career night, playing 36 minutes, scoring 13 points on 4-of-6 shooting, including 3-of-5 from three-point range, and he was the only Buckeye on the roster who had any success defending the 7-foot-2 Haas, who only scored two points on 1-of-4 shooting in the second half.

The game was a struggle for Ohio State every single minute, but they never wilted, never wavered, and always found a way to respond.

Trailing 60-59 with under two minutes to play, Wesson caught a pass on the wing and hesitated before banking in a three pointer to give OSU a 62-60 lead with 1:14 to play. Boilers forward Vincent Edwards converted a three-point play of his own following a foul from Bates-Diop with 48 seconds remaining in the game.

On Ohio State’s next possession, Jae’Sean Tate missed a field goal attempt, but guard Andrew Dakich came away with the offensive rebound, and head coach Chris Holtmann quickly called for a timeout with 15 seconds remaining to draw up the game winner.

With the final possession, Tate took the ball to the basket and put the ball up on the rim, where it was followed up once by Bates-Diop and then put up and in on a second attempt by KBD for the lead.

“You don’t have to tell these guys much,” Holtmann told the Big Ten network of his words prior to the play. “They play on instincts. That was all Keita. J.T. forced some help. Keita came in there and made a heck of a play. I’m really proud of the guys.”

Bates-Diop led the Buckeyes with 18 points and 11 rebounds. Freshman guard Musa Jallow scored his first points in his last 10 games, netting 10 points for OSU on 3-of-4 shooting from three-point territory.

“I did grab Musa at the shootaround, ‘Hey, I’m watching you and you’re not shooting with confidence. If you have an open shot, I want you to let it fly,'” Holtmann said. “I am really proud and happy for him.”

🎉 THE CELEBRATION IS ON! #GoBucks pic.twitter.com/l55ThxuiMB

The Buckeyes went the first 5:34 of the game without scoring, missing their first seven shots in the process. Despite the offensive struggles, the OSU defense held Purdue to just five points in that stretch.

Jae’Sean Tate finally got Ohio State on the board with a layup to make it 5-2, and then C.J. Jackson added another layup on the ensuing possession to make it 5-4. A dunk by Bates-Diop and two free throws by Micah Potter concluded an 8-0 run.

The two teams then spent most of the rest of the first half trading baskets until about the 4-minute mark when the Boilermakers built up a 31-22 lead with under two minutes to play. OSU would close on a 7-0 run, however, on Jallow’s second three-pointer of the game, followed by a Bates-Diop jumper and a Tate layup with two seconds remaining to make it 31-29 at the half.

It was a great close to a very tough first half for the Buckeyes. Kaleb Wesson was in foul trouble for much of the half, finally seeing the bench for good after his third foul. For the game, Wesson only played 12 minutes and went scoreless. Tate, Potter, and Kyle Young all had two fouls in the first half as well.

Purdue had just three scorers in the first half, as Haas scored 16 points on 6-of-7 shooting and Carsen Edwards added 12 points. Edwards would finish with a game-high 28 points.

Kaleb Wesson was whistled for his fourth foul three minutes into the second half and went back to the bench. He was replaced by Potter, who came in and tied the game at 31-31 on a thunderous dunk.

The tie seemingly woke Purdue up, as they would then go on a 12-3 run thanks to four three-point field goals in five attempts over a span of less than three minutes.

They then continued to extend their lead until the Buckeyes decided they had finally had enough.

Up next for Ohio State is a home game Saturday at 6:00 pm against Iowa. The game is on BTN, but there are only two home games remaining on the schedule and if you can, you should really try to see this team in person. 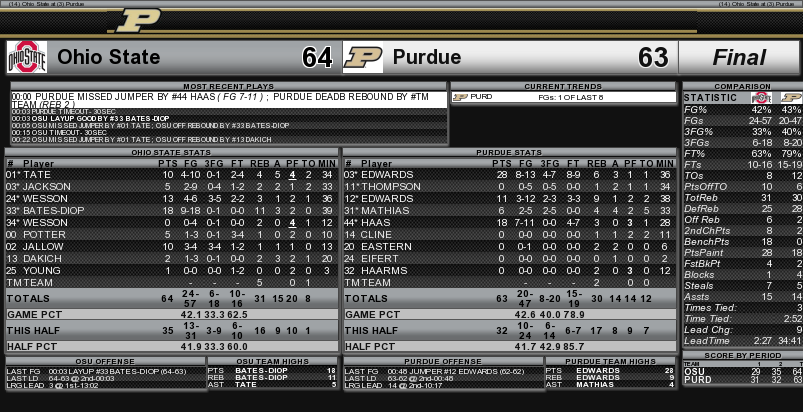