After completing our look at what Ohio State’s 2019 recruiting class could look like on the offensive side of the ball, it’s time to turn to the defense and special teams.

It’s quite a puzzle to try to put together, because there are only two players who are guaranteed to be gone after the year, but another six or more could jump early to the NFL. How many holes will Urban Meyer’s staff have to fill?

You can take a look at the scholarship chart at the bottom of this page to get some idea. We know for sure that LB Dante Booker and K Sean Nuernberger will be gone after this fall. It’s pretty much a guarantee that DE Nick Bosa and DT Dre’mont Jones will jump to the NFL as well. Based on history, at least one and possibly both junior CBs, Kendall Sheffield and Damon Arnette could go, but just about any upperclassman getting meaningful minutes on the defense is a candidate to turn pro after the season.

The ballpark guess is that the Buckeyes will have 23 or so scholarships available after the year, and will spend 12 of those on offense. Here’s what they might do on defense.

Defensive End: The Bucks have only three returning players at this spot, and two are legitimate candidates to be gone after the year. Nick Bosa has talked pretty openly about the fact that he’s planning on making 2018 his last season in Columbus. Jonathon Cooper has the pedigree to make that leap as well if he has a strong year. If both go, that would leave just Chase Young and at most a quartet of players wrapping up their freshman seasons. Tyreke Smith, Javontae Jean-Baptiste, and Tyler Friday are the first three. Alex Williams was considered a DE as a recruit, but is listed only as an “athlete” on OSU’s list of signees. That makes this a position of need for 2019. Luckily for the Buckeyes, the top DE in the entire nation plays his high school football just outside 270. Zach Harrison is ranked as the no. 1 player at any position by 247, and is the 4th-ranked player in the industry-wide composite rankings. OSU is considered a heavy favorite to win his commitment. Another name to know is Noah Potter, a 4-star prospect who is the younger brother of current Buckeye basketball player Micah Potter. Prediction: 2

Defensive Tackle: After repeatedly striking out on some of the nation’s top DTs for several cycles in a row, the Buckeyes hit the jackpot in 2017. They grabbed Taron Vincent, the top-rated player at the position in the country. They added Tommy Togiai, considered the third-best. Friday, who the Buckeyes listed as a DE, was rated as the 6th-best DT in the country and could theoretically end up there. They also added Antwuan Jackson, a 4-star JUCO transfer. But they could be in the market for another sizable class in 2019. Dre’mont Jones considered declaring for the NFL Draft this offseason, and will likely do so next January. Jackson could theoretically jump to the NFL after this season, as could guys like Jashon Cornell, Robert Landers, Malik Barrow. The Buckeyes won’t lose all of them, but they will almost certainly be looking to replace at least a couple. Prediction: 2

Linebacker: Booker will be gone for sure, and if history is any indication, at least one or two of the guys behind him may head to the Draft early as well. If you’re a starter at linebacker as an upperclassman at Ohio State, you’re about an even-money bet to turn pro. The Buckeyes brought in an impressive trio of linebackers in 2018, and figure to end up targeting another three in the coming year. Cade Stover, a 4-star OLB prospect from Mansfield, has been on campus at least five times in the last year and is a good bet to grab one of those spots. Prediction: 3

Cornerback: Both returning starters, Sheffield and Arnette, are a decent bet to jump early if they have a good fall. But this room is loaded with talented underclassmen. After bringing in one of the greatest CB classes of all time in 2017, the Buckeyes added another talented pair this season. They’ll likely aim to do the same thing in 2019. Prediction: 2

Safety: Jordan Fuller could jump to the NFL after the 2018 season, but even if he goes, there will be a lot of talent returning for 2019. Isaiah Pryor figured to to be a returning starter that year and true freshmen Josh Proctor and Marcus Hooker both come in with both the talent and pedigree to be standouts as well. If Brendon White has finally settled here and doesn’t shift positions again, he could be an impact player, and it’s possible that someone like Marcus Williamson could move over from CB as well. With both Pryor and White eligible to leave after 2019, the Buckeyes figure to take two a pair of safeties to keep the pipeline full. Prediction: 2

Special Teams: Sean Nuernberger is done after 2018, but the Buckeyes already have Blake Haubeil on scholarship, so they don’t figure to add another kicker. Drue Chrisman has another two years after this one, so punter is all set. It’s always important to have a plan of succession in place for critical positions such as President of the United States or long snapper. Fortunately, OSU has a snapper-in-waiting already lined up. Liam McCullough’s younger brother Roen is already officially on board as a walk-on. He will take his older brother’s scholarship when he leaves. Prediction: None

That makes 11 recruits on defense, to go with the 12 on offense, for a total of 23. That may seem like it’s a little on the high end given the small senior class, but the Buckeyes have brought in 26, 21, 25, 26, and 25 the last five cycles, so they’ll probably end up somewhere around that number. 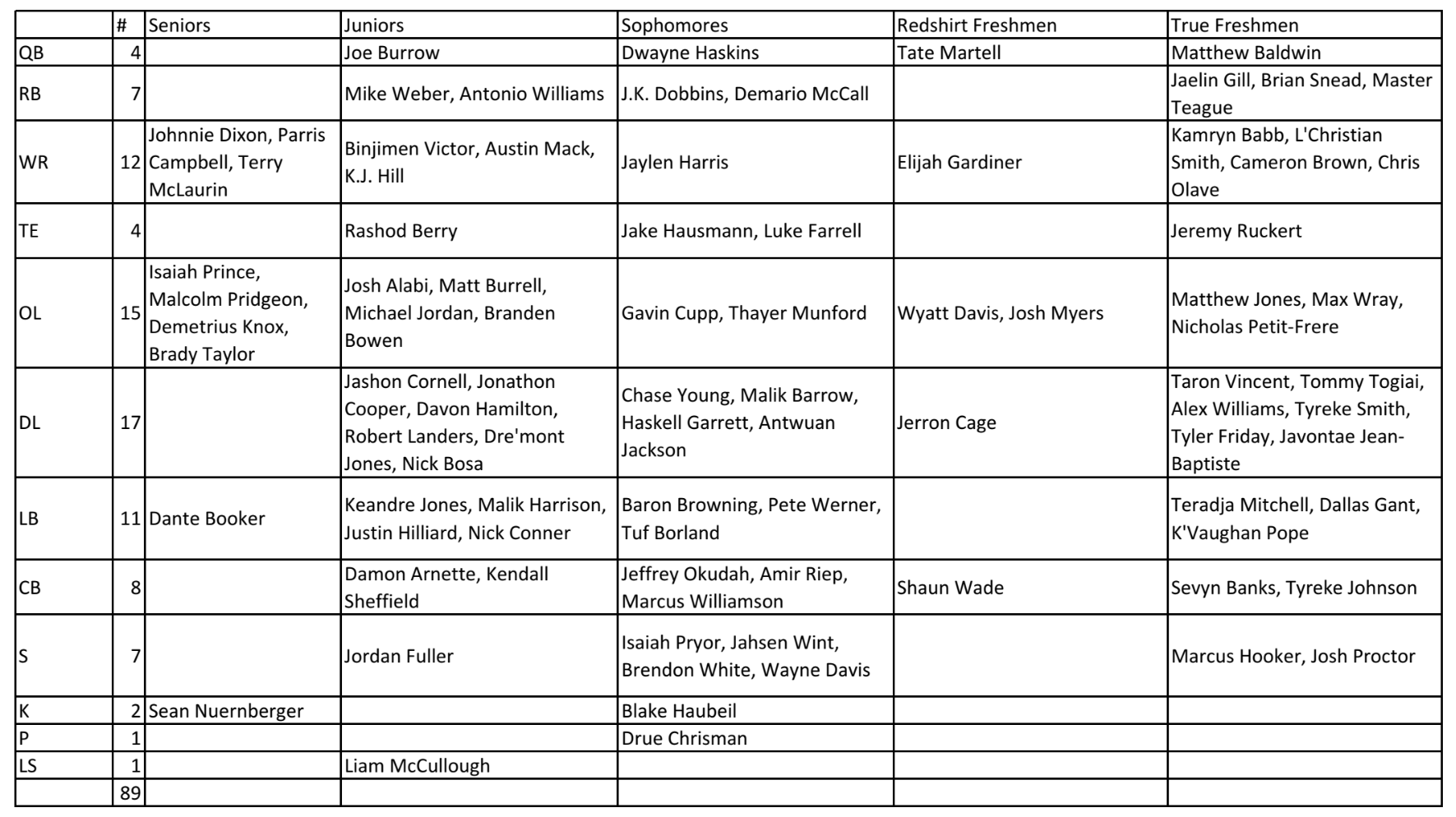