Ohio State’s first official depth chart of the 2018 football season has been released, which means there is now plenty to speculate upon. There weren’t as many ORs as expected, and thanks to the press conferences with Ryan Day and Greg Schiano on Monday, there aren’t a ton of surprises here. Still, there’s enough here to chew on and draw conclusions from.

The offensive line has been heavily discussed, and as Day promised on Monday, Thayer Munford and Joshua Alabi are sharing an OR at left tackle. If Munford is healthy enough to go, then he will likely get the start. If they don’t want to push him, maybe he’ll get snaps later in the game.

Fifth-year senior Brady Taylor is listed as the backup at left guard and OR’d with redshirt freshman Josh Myers at center behind new starter Michael Jordan.

Also, as Urban Meyer promised on signing day, offensive lineman Nicholas Petit-Frere has shown up in the two-deep as Isaiah Prince’s backup at right tackle. Petit-Frere is one of 10 true freshmen listed on the depth chart below.

Rookie running backs Master Teague and Brian Snead are sharing an OR, as are the two guys above them, J.K. Dobbins and Mike Weber.

The receivers are essentially unchanged from last season, save for the addition of freshman Chris Olave behind Johnnie Dixon and Terry McLaurin, and the fact that there is no OR tying Austin Mack and Binjimen Victor together anymore.

There are four true freshmen in the two-deep of the defensive line, as Tyreke Smith and Tyler Friday are listed behind Nick Bosa, Taron Vincent is impressively an OR with Davon Hamilton at nose tackle behind Robert Landers, and Tommy Togiai is an OR as well with sophomore Haskell Garrett behind starter Dre’Mont Jones.

As expected, Jonathon Cooper and Chase Young are sharing an OR.

Redshirt sophomore middle linebacker Tuf Borland is on the depth chart, but his availability is still up in the air. Sophomore Baron Browning is expected to start, which is why he is at the top of the depth chart. Interestingly, the two guys listed behind him battled injuries and recoveries this camp, so did he actually win the job or simply win it by default? We’ll find out on Saturday.

The cornerbacks came in as expected, with Kendall Sheffield and Damon Arnette on the top of the heap. While sophomore Jeff Okudah is part of the three-man rotation, he was not given an OR. Maybe they ran out?

Also not being saddled with an OR is sophomore safety Isaiah Pryor, who is listed as the starter next to Jordan Fuller. Greg Schiano said on Monday that Pryor and redshirt sophomore Jahsen Wint would split reps against Oregon State to continue determining the starter.

Also interestingly, it is true freshman Josh Proctor behind Wint who is wearing an OR. Perhaps it was Wint’s and maybe it slipped down to Proctor?

Redshirt sophomore H-back Demario McCall is listed as the No. 1 at both kick and punt returner, which was the hope in the spring when they put him there. 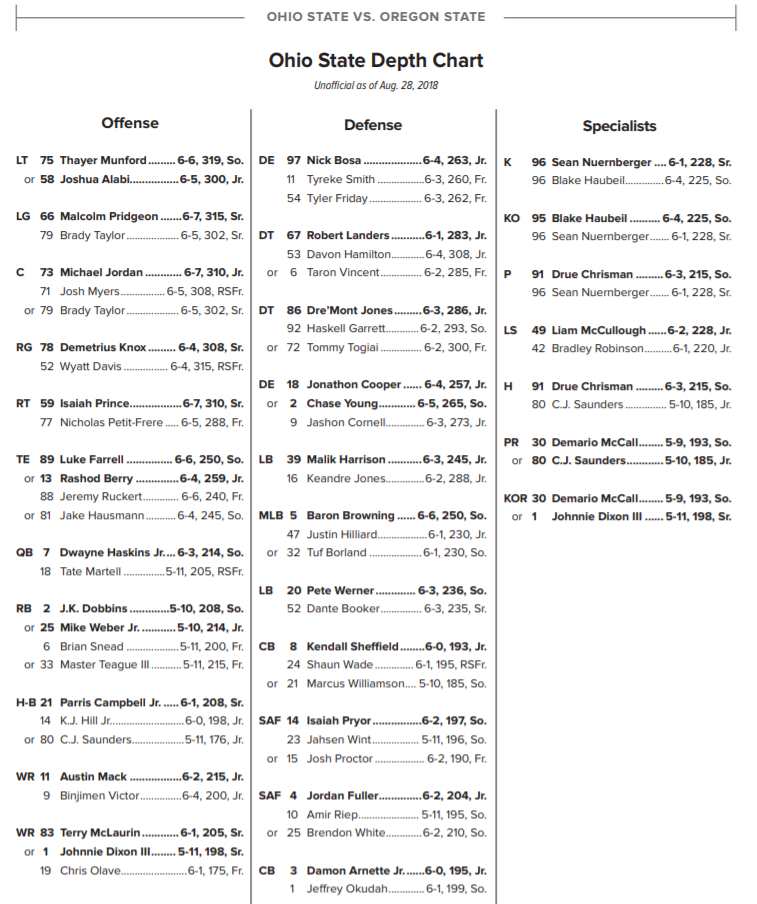