Ohio State has released the depth chart ahead of Saturday’s Rutgers game and there aren’t a lot of changes. There were 10 players making their first career starts last week, and it looks like most of those players will be making their second career starts.

One change that the Buckeyes are hoping is made is the return of junior free safety Jordan Fuller. Fuller was a surprise scratch last week after tweaking his hamstring earlier in the week.

Fuller was out on the Ohio Stadium turf a couple of hours before the game trying to get loosened up enough to play. He was working out under the watchful eye of Mickey Marotti, but ultimately they decided to hold him back. The expectation from the defensive staff is that he will be back this week, but it may be too early for guarantees.

In Fuller’s absence, the Ohio State safeties struggled as both sophomore Isaiah Pryor and redshirt sophomore Jahsen Wint were making their first career starts. Everything gets a little easier with each successive start and the belief is that both Pryor and Wint will be better this week having learned plenty on Saturday.

If Fuller is able to go, expect Pryor to get the start at strong safety, which is where Wint was last week. Wint and Pryor will then likely rotate throughout the game. Of note, freshman Marcus Hooker makes his first appearance on the depth chart after serving a one-game suspension last week for an OVI in the offseason.

At linebacker, you can probably expect the same starting trio of Malik Harrison, Baron Browning, and Pete Werner. Tuf Borland played in 10 snaps last week, which was his “pitch count.” Depending on how he responds to practice and playing, that number will grow each week. When he is back fully, a rotation of sorts may emerge at linebacker. Or, more accurately, packages may be developed for certain players in order to get as many linebackers on the field as deserve to be there.

On the offensive side of the ball, the offensive line remains unchanged. And why shouldn’t it? All five starters graded out as Champions, and their backups played well in extended opportunities throughout the game. True freshman Nicholas Petit-Frere was the lone rookie on the offensive line, but redshirt freshmen Wyatt Davis and Josh Myers also made their Buckeye debuts.

Acting head coach Ryan Day has been touting the Ohio State wide receivers, and last week 10 of them saw the field. Seven of them caught a pass.

Don’t expect Terry McLaurin to have 100 yards this week, or for K.J. Hill to have six catches or Austin Mack to have five. With the way these guys rotate, posting consistent numbers is going to be a little difficult. What each of these three receivers showed last week, however, is that there is reason to continue going back to them when they are in the game.

Even though Mike Weber rushed for 186 yards against Oregon State, the Buckeyes are still sporting an OR at running back. Expect the same kind of distribution to continue with Weber and J.K. Dobbins, with the hot hand getting a few more carries as Weber did last week.

It wasn’t just Weber and Dobbins last week, and it won’t just be those two moving forward either. Last week the foursome of Weber, Dobbins, and freshmen Master Teague and Brian Snead combined for 341 yards rushing. That’s not bad. It’s also an indicator of things to come.

And, to nobody’s surprise, Dwayne Haskins is still your starting quarterback. That stuff will happen when a guy sets a school record for passing yards and touchdowns in a debut.

Here is the entire Ohio State football depth chart in preparation for Rutgers at 3:30 pm on Saturday (BTN). 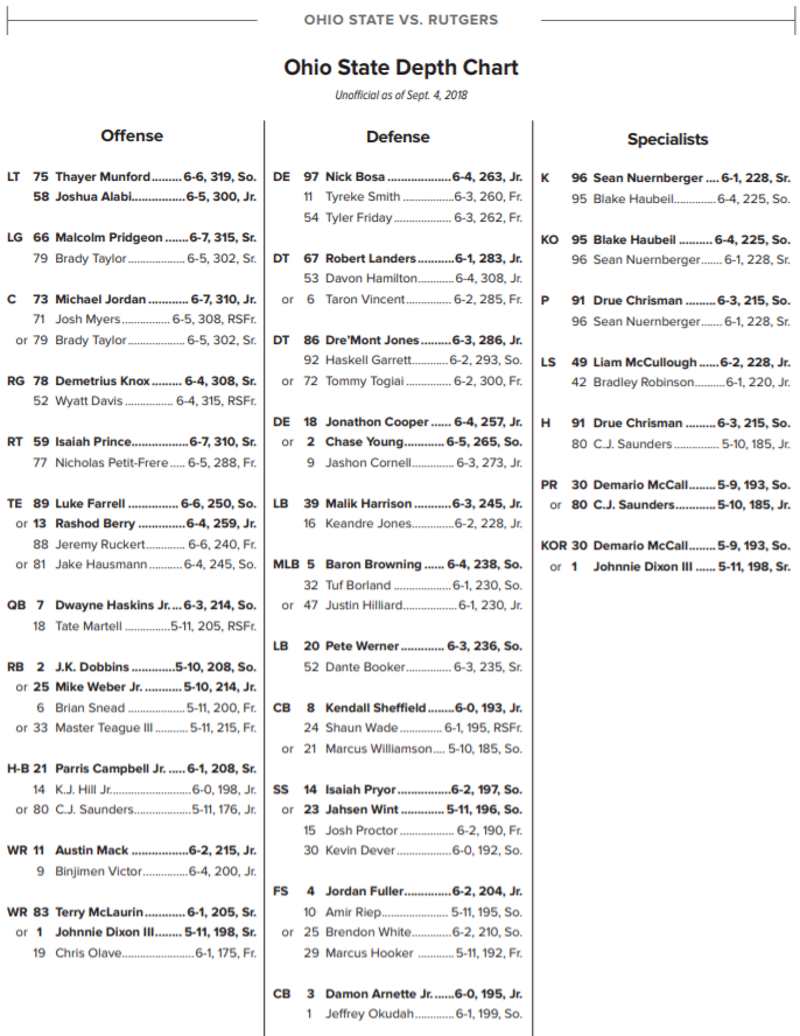