The Buckeyes were paced by center Kaleb Wesson, who led the team with 25 points and eight rebounds.

The story of the game was Michigan State shooting 13-of-17 (76.5%) in the second half, after trailing 43-36 at the half. The Buckeyes stayed with MSU as long as they could down the stretch, but they eventually wore down due to cramping from point guard CJ Jackson and foul trouble from Wesson.

Kaleb Wesson didn’t get his first basket until the 14:55 mark of the first half with a lefty layup to make it 8-7 Michigan State. It would be the first of many for Wesson, who also scored the next time down the court as well.

A spinning layup from MSU wing Matt McQuaid gave Michigan State a 16-11 lead, which was their largest of the half.

On Ohio State’s next possession, Kyle Young took a pass in the lane and seemingly gave up a shot at a layup and dropped a pass into the corner for CJ Jackson, who buried a three. On OSU’s next possession, it was a Jackson who gave the ball up for a Young basket to tie the game at 16-16.

Despite the cramping, Jackson scored 10 points, grabbed five rebounds, and handed out five assists. He also came away with four steals in 28 minutes of action.

The Buckeyes finally gained the lead at 24-23 when Jackson stole a Michigan State pass and had his layup attempt goaltended. The lead then went back and forth for a few minutes before OSU gained control again.

An and-one three-point play from Kaleb Wesson made it 35-31 with two minutes to play. That was then followed by an absolutely crazy sequence of saves from the Buckeyes that ultimately led to a Duane Washington three to give OSU a 38-31 lead.

Ohio State ended the half on a pick-and-roll three-pointer from Kaleb Wesson, giving the Buckeyes a 43-36 lead at the half.

Ohio State was able to extend the lead in the second half to nine points, but following a floater in the lane by Young to give OSU an 8-point lead with 16:47 to play, Michigan State began to make their run.

A pair of free throws by McQuaid and two layups by Winston made it a 2-point lead for OSU at 50-48, but then MSU’s Aaron Henry hit a three on their next possession to give the Spartans a 51-50 lead.

Jumpers by freshman guards Luther Muhammad and Duane Washington gave OSU a 3-point lead, but it was short-lived. After baskets were exchanged, a series of free throws by MSU gave the Spartans a 64-59 lead with 8:59 to play.

Washington once again answered, this time dropping in a three-pointer, which was then followed by a layup by Andre Wesson on OSU’s next possession to tie the game at 64-64 with 7:38 remaining.

Washington scored 10 points for the Buckeyes and had some critical makes — as well as some critical misses. His inexperience down the stretch showed, and his aggression sometimes put him in bad spots.

A pair of free throws by McQuaid gave MSU the lead back, but following a missed three from Washington, Kyle Young dunked home a putback to once again tie the game.

Nick Ward converted a 3-point play for the Spartans, but that was answered by a three from Andre Wesson. Following a pair of missed free throws from Kaleb Wesson, MSU built the lead back up to three once again with a layup by Kenny Goins, forcing an OSU timeout with 3;28 to play.

Kyle Ahrens rebounded an MSU miss and put it back in to give the Spartans a 77-72 lead with just over two minutes to play, essentially sealing the game for Michigan State. The Buckeyes couldn’t get any closer over the final minutes.

MSU point guard Cassius Winston scored 25 points and  handed out five assists. He only turned the ball over twice. He played 36 minutes and hit 8-of-12 from the field and 7-of-11 from the free throw line. Spartans head coach Tom Izzo called Winston an extension of his own brain with the way he played in the second half. Winston scored 18 of his points and dished out four of his assists in the second half.

+ The Buckeyes are 8-2 when leading at the half this season and 4-0 when they don’t.

+ Ohio State turned the ball over just five times, which was their lowest mark since Rutgers almost exactly one year ago today.

+ After the game, Holtmann said that he would like to see more aggression from point guard Keyshawn Woods. Woods passed up some open looks on the day, but maybe it was for good reason. He went 0-for-5 from the field and missed all three of his three-point attempts. He did have four assists, however. 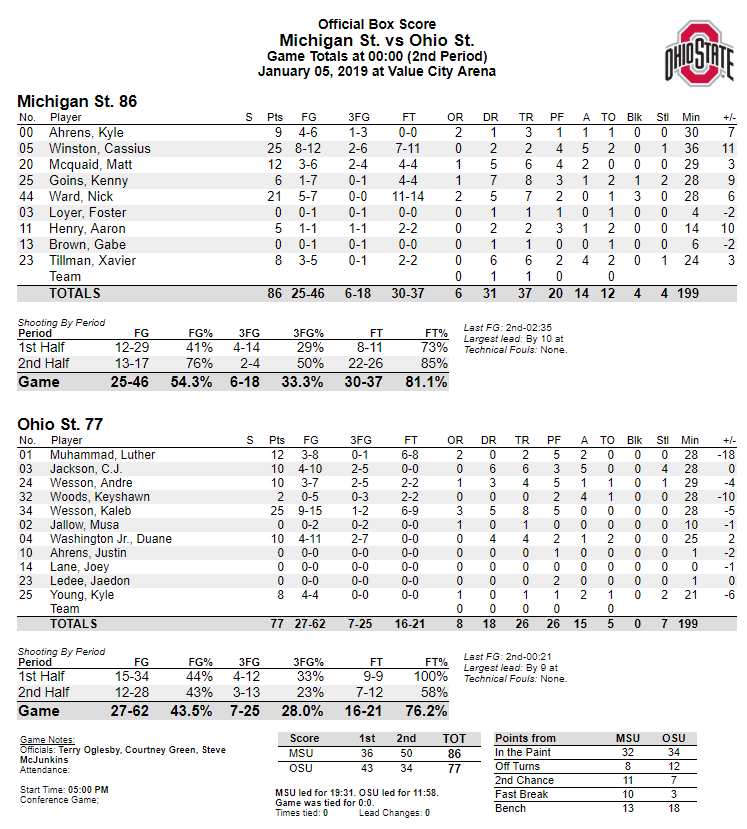