The Buckeyes got hot from three-point territory in the second half, which allowed them to get back into the game, but could not sustain their shooting long enough to ever grab or keep a lead.

Ohio State was led by junior forward Andre Wesson, who scored 22 points and was responsible for much of OSU’s comeback. He hit his first nine field goal attempts, which included a half-court buzzer beater at the end of the first half.

Purdue got off to a slow start and didn’t score their first points until the 15:39 mark of the first half. Following the game, Boilers head coach Matt Painter mentioned being thankful that Ohio State also suffered a slow start at the outset.

Despite the early struggles, the Buckeyes led it 17-8 with 10:57 left in the first half. But then Purdue woke up.

The Boilermakers went on a 22-1 run to take a 30-18 lead. They built that lead up to 39-24, but the the Buckeyes closed with a Musa Jallow dunk and the aforementioned Wesson half-courter.

Ohio State was finally able to make a run later in the second half, including one particular run that saw Wesson, Musa Jallow, and Justin Ahrens get the crowd going with three-pointers.

In fact, the Buckeyes closed it to 58-56 with 10:15 remaining, but the Big Ten’s leading scorer Carsen Edwards dropped in three of his game-high 27 points for a five-point cushion.

Every time the Buckeyes would get within one possession, Purdue would always have the answer. Eventually Ohio State ran out of three-pointers and Purdue pulled away. 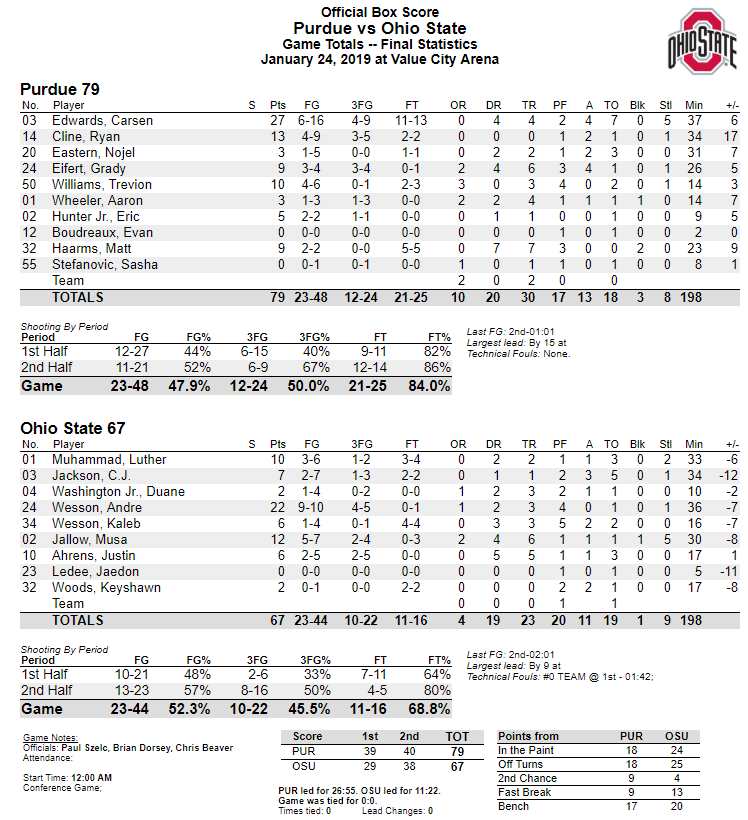