After watching Ohio State center Kaleb Wesson dominate Iowa State in the paint two nights ago, Houston head coach Kelvin Sampson clearly vowed not to let that happen against his team, as he sent double team after double team Wesson’s way, forcing the ball out of his hands and to a group of Scarlet and Gray shooters who started hot, but eventually found their level in a 74-59 Cougars win over the Buckeyes.

Wesson didn’t get his first official field goal attempt in the paint until there were under four minutes remaining in the game. Every other shot was from three-point range, which he hit two of six attempts (missing his last four). Ohio State was outscored 34-12 in the paint

In his final game as a Buckeye, senior point guard CJ Jackson scored a team-high 18 points, while fellow senior Keyshawn Woods scored 10. Together, the two combined to make just five of 16 three-point attempts.

Ohio State didn’t get even their first shot up in this game until the 17:36 mark of the first half. Fortunately for the Buckeyes, it was a made three-point field goal by Woods to make it 4-3 Houston.

Ohio State’s hot shooting continued with consecutive threes from Kaleb Wesson to give the Buckeyes their first lead of the game at 11-9. Houston had answers, however, as guard Corey Davis scored the next eight points to give the Cougars some elbow room.

CJ Jackson dropped in a three and then hit a two-point jumper on OSU’s next possession to cut the Houston lead to 17-16 with 11:34 to play in the half. A three-pointer from Andre Wesson a minute later gave Ohio State the 21-19 lead, forcing Cougars head coach Kelvin Sampson to call a timeout to try and stop the Buckeyes’ 10-2 run.

Musa Jallow got into the action 30 seconds later with a three of his own, giving Ohio State a 3-point lead, which would be their largest of the game. It would also be their last lead.

Trailing 27-25 with 5:44 to play, Kaleb Wesson picked up his second foul of the half when he was whistled for an illegal screen. Ohio State head coach Chris Holtmann sent Wesson to the bench, and in just over a 2-minute stretch, Houston built a 9-point lead. Wesson was then brought back into the game, but the damage had been done.

Every time the Buckeyes would cut it to four or five points, Houston would go on a run and build the lead back up to nine or 10 points. For every step back the Cougars had, they’d take two steps forward and gain a little more ground every couple of minutes.

Eventually, their up-and-down pace wore on Ohio State and tired them out. Shots were left short and one-on-one defense was continuously exploited by Houston’s talented guards.

The Buckeyes never got closer than nine points over the final 7:44.

Their season comes to a close in the second round of the NCAA Tournament, just as it did last year.

This time, however, they somehow did it without the Big Ten Player of the Year.

The star here was Houston head coach Kelvin Sampson whose gameplan to double Kaleb Wesson on every post pass was incredibly effective. The Cougars’ physical style worked like body blows, while their pace eventually winded the Buckeyes to the point that their entire game was affected. Sampson had no fear of Ohio State’s shooters and it eventually paid off.

+ Ohio State missed 30 shots and came away with just six offensive rebounds. The need to rely on the veterans so heavily on Friday night and then again tonight cost them some legs, but Holtmann didn’t really have a choice. The freshmen showed several times over the weekend that they weren’t quite ready to be as collected as they need to be.

+ For those Buckeye fans wondering where Justin Ahrens has been during the NCAA Tournament, the answer is defense. Both Iowa State and Houston have talented guards who can get to the basket, as everyone saw Sunday. Musa Jallow’s defense and rebounding gets him on the court, and when he’s hitting shots, it can keep him there.

+ That being said, expect some very good things from Ahrens, Luther Muhammad, and Duane Washington next season. 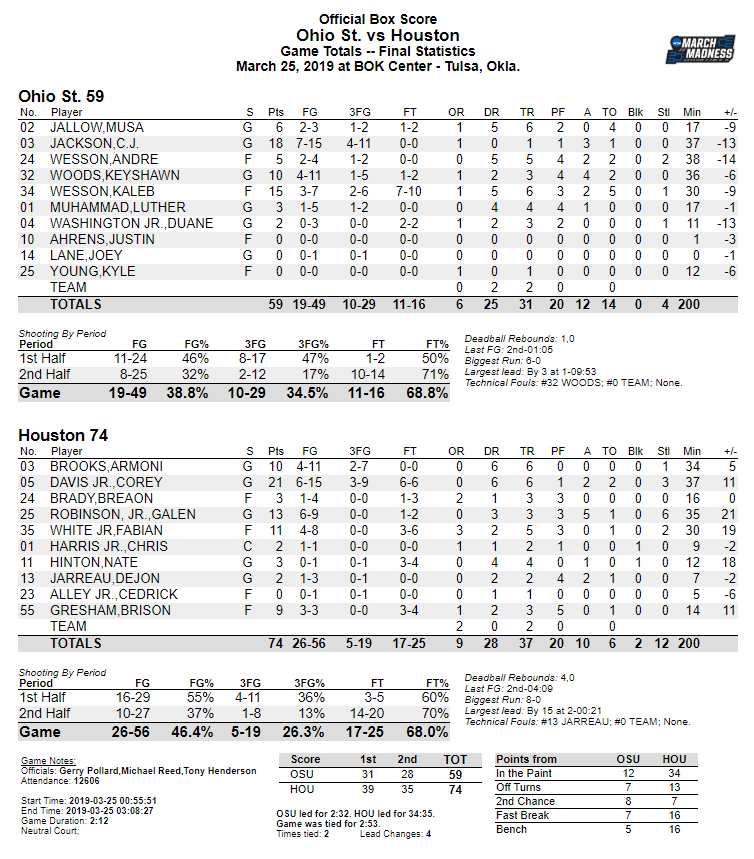