The No. 8-seed Ohio State Buckeyes (19-12, 8-11) will play the No. 1-seed Michigan State Spartans (25-6, 16-4) in the Big Ten Tournament quarterfinals Friday at 12:30 pm. The Buckeyes enter this game following a 79-75 win over No. 9-seed Indiana in the second round on Thursday. Michigan State, meanwhile, has been happily waiting and preparing through their double bye. Their last game out was a 75-63 win over No. 7 Michigan for a share of the Big Ten regular season title on Saturday. The Spartans have won both games against Ohio State this season.

Who: Ohio State vs. Michigan State

Why: Because the road to the Big Ten Championship Game goes through Tom Izzo.

+ The Buckeyes scored a total of 168 points in the three games during Kaleb Wesson’s suspension. In the last two games in which he has played, they’ve scored 169. 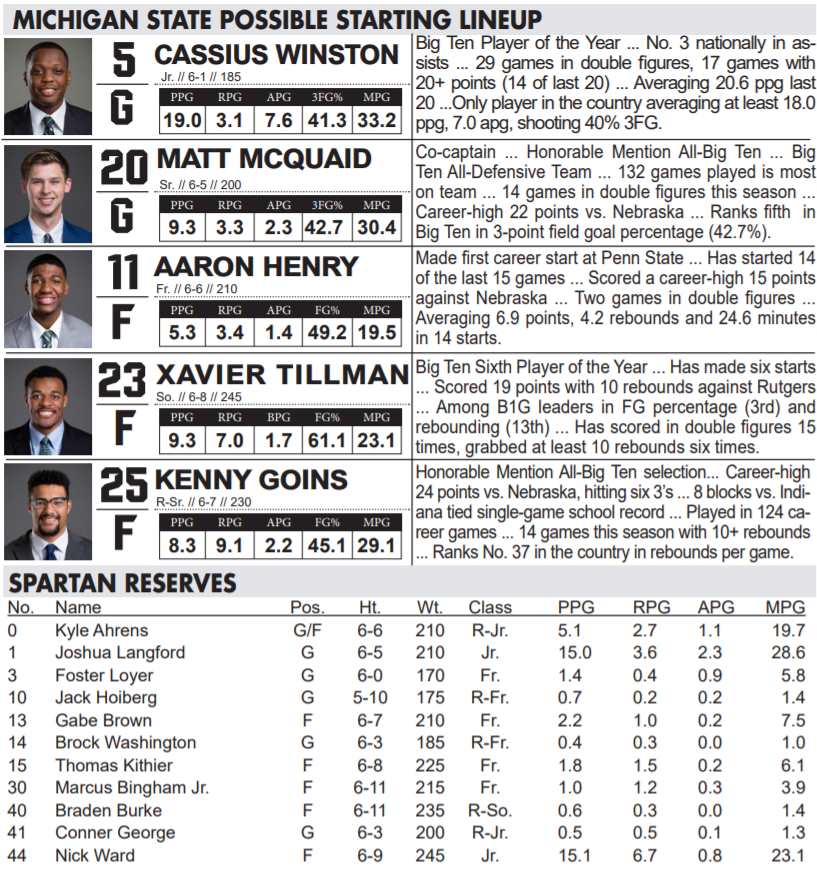 + Nick Ward is expected to play for the first time since he injured his hand in the last matchup with the Buckeyes.

+ Michigan State junior guard Cassius Winston was named the Big Ten Player of the Year by the conference’s media and coaches, the Big Ten office announced on Monday, March 11. Winston was also one of two unanimous selections to the All-Big Ten First Team. Winston, who was named a First Team All-American by the Sporting News on Monday morning, is averaging 19.0 points, 7.6 assists and 3.1 rebounds, while shooting 47.1 percent from the floor and 41.3 percent from 3-point land. He ranks fourth in the Big Ten Conference in scoring, while also leading the league and ranking No. 3 in the country in assists per game. Winston has scored at least 20 points 17 times this year, has six double-doubles in points and assists, has handed out at least 10 assists seven times and has dished out at least six in 25 games.

+ In five starts since the loss of junior forward Nick Ward, Xavier Tillman is averaging 14.4 points and 7.8 rebounds.

+ MSU ranks among the top-10 in the country in 10 different statistical categories.

+ Junior guard Cassius Winston was named the Big Ten Player of the Year by the conference’s media and coaches, the Big Ten office announced on Monday, March 11. Winston was also one of two unanimous selections to the All-Big Ten First Team. Winston was one of five Spartans to earn All-Big Ten honors. Junior forward Nick Ward was an All-Big Ten Third Team selection by both the media and the coaches, while redshirt senior forward Kenny Goins and senior guard Matt McQuaid were honorable mention selections by the media and coaches. McQuaid earned a spot on the All-Defensive Team and sophomore forward Xavier Tillman was named the league’s Sixth Man of the Year. Winston was also selected by the Associated Press as the Big Ten Player of the Year and was a unanimous pick to the All-Big Ten First Team.