William & Mary junior guard/forward Justin Pierce announced on Friday that he is planning to transfer from the school following his graduation in May. He tweeted out his decision. 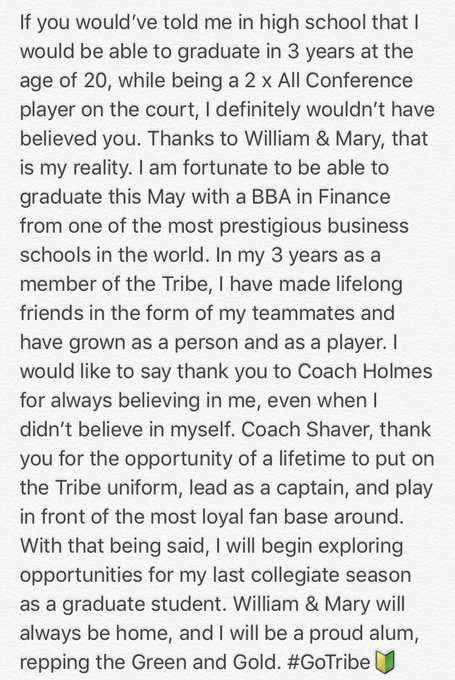 According to Stadium’s Jeff Goodman, Ohio State is one of the many schools who have reached out to Pierce.

Pierce, originally from Glen Ellyn, Illinois, has the ability to handle the ball and distribute to his teammates. He is good athlete who is also quite comfortable playing without the ball and finding openings. Pierce can bring the ball up the court following a rebound and get his team into their offense quite easily. The dip in shooting this season would signify some type of lingering injury or more likely, shots didn’t come as freely as they did as a sophomore and Pierce had to manufacture his own shot more often. That doesn’t necessarily explain the 20-point drop in free throw shooting.

The Buckeyes will have some depth at the 2/3 next season, but Pierce — who would be eligible immediately — could still certainly help.

Ohio State is far from alone in schools reaching out, however.

OSU’s scholarship numbers are worth watching here. The Buckeyes have signed three players in the 2019 recruiting class, so they do still have one spot open. A week ago, they offered 2019 7-footer Ibrahima Diallo, and if he accepts that offer, Ohio State would be at their scholarship limit of 13.

With players like Duane Washington, Luther Muhammad, Justin Ahrens, and Andre Wesson playing the 2/3 for the Buckeyes, as well as incoming freshmen Alonzo Gaffney and EJ Liddell, another perimeter wing wouldn’t seem to be a high priority.

However, Pierce is a skilled playmaker who would provide experience and a very productive complement to Kaleb Wesson in the post.

If Ohio State is going to be a player here, they will first need to get Pierce on campus for a visit following the season.