Michigan State freshman point guard Foster Loyer came into Friday’s Big Ten Tournament game against Ohio State averaging 1.4 points per game. With his first shot, he more than doubled his typical output. With his second, he quadrupled it. With his third and fourth, he continued to baffle a Buckeye defense that didn’t appear to know where this particular backup sharpshooter had come from.

Despite the Buckeyes’ objection, Loyer scored a career-high 14 points, connecting on 4-of-5 from three-point range in the Spartans’ (26-6, 16-4) 77-70 win over Ohio State (19-13, 8-12). Loyer received more minutes than normal in place of All-American point guard Cassius Winston who was dealing with a foot injury.

OSU leading scorer Kaleb Wesson played just 15 minutes before fouling out, scoring seven points in the process. While he was on the court, however, the Buckeyes outscored MSU by three points.

The two teams traded baskets for most of the first half before MSU grabbed a 36-30 lead at intermission, thanks to three baskets from Winston in the final two minutes.

The Buckeyes quickly began attacking that lead in the second half. Kaleb Wesson and MSU swingman Aaron Henry traded baskets, but then a timely interior pass from Andre Wesson to Musa Jallow ended in a dunk and a 4-point game. Henry missed a field goal attempt on the next Spartan possession and CJ Jackson found Andre Wesson for a three on the right wing to make it 38-37 Michigan State.

On OSU’s next possession, Kaleb Wesson followed in his brother’s footstep and sank a three of his own to give the Buckeyes their first lead since it was 25-23 in the first half.

Michigan State tied the game at 40-40 on a pair of free throws by guard Matt McQuaid, and then things quickly went south for Ohio State.

McQuaid got switched over defensively on the ensuing possession and was defending Kaleb Wesson in the paint. McQuaid was pushing too much and was whistled for a foul. Due to the pushing, as Wesson was going up for his shot, he threw an elbow at McQuaid’s head and was whistled for a flagrant-one foul. It was his third foul of the game.

This gave MSU two free throws, which McQuaid made, and the ball, which Foster Loyer plea bargained into a three-pointer to give the Spartans a 45-40 lead.

Loyer and McQuaid sandwiched a Keyshawn Woods basket for a 49-42 lead. That lead then grew to 12 points following a 4-point play for Winston with under nine minutes to play.

Michigan State led it 75-54 with 4:21 remaining before Ohio State went on a 16-0 run to get the game down to a 5-point deficit with nine seconds remaining, but they would get no closer.

Keyshawn Woods had another strong day, leading the team with 16 points on 5-of-8 shooting.

Ohio State is believed to be in the NCAA Tournament at this point, but will still be holding its breath during the selection show on Sunday.

As expected, Michigan State point guard Cassius Winston was the star of the day. He scored a game-high 18 points, hit all nine of his free throw attempts, grabbed seven rebounds, dished out five assists, and hit some clutch shots down the stretch, all in just 22 minutes of play.

+ Justin Ahrens was 0-for-2 from the field on the day. Defenses know not to leave him open, so he is struggling to find a way to impact the game. He only played nine minutes today, finishing with a +/- of -9. Musa Jallow, on the other hand, almost always has to find ways other than scoring to impact a game, and he finished with a team-high +7.

+ When Kaleb Wesson committed his fourth foul and left the game, MSU was up 49-44. When he came back a little over two minutes later, the Spartans had built a 56-46 lead, forcing head coach Chris Holtmann to bring him back in the game. Fifteen seconds later, he fouled out, effectively ending the game with 9:42 left to play.

+ Nobody on the floor had more than three rebounds for the Buckeyes. “Nobody” actually had four rebounds for Ohio State, meaning the ball bounced out of bounds four times and ended up in OSU’s possession because it was last touched by a Spartan. 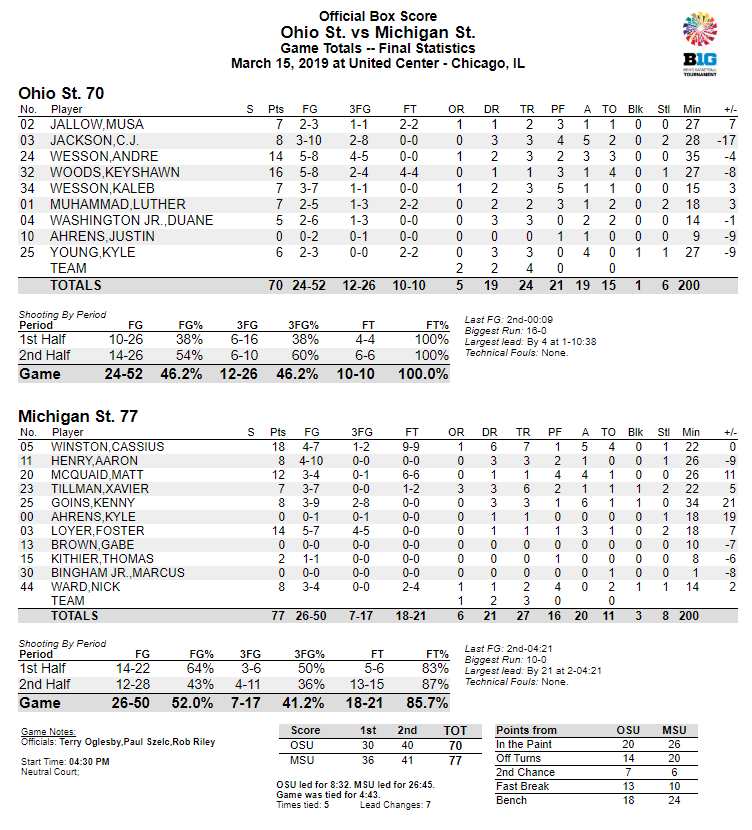