WEST LAFAYETTE, In. — It wasn’t just like football, but the similarities were unmistakable.

Guard Carsen Edwards scored 19 of those first-half points and was one of five different Boilermakers to make a three-pointer in the first 20 minutes of the game.

Playing without starting center and leading scorer Kaleb Wesson due to suspension, Ohio State came into Mackey Arena as considerable underdogs, but not even Las Vegas could have expected the onslaught of shooting levied by Purdue.

The game was tied innocently at 7-7 following a three-pointer by OSU junior forward Andre Wesson at the 15:00 mark, but from there things got out of hand quickly.

Purdue hit three-pointers on four of their next five possessions, making it 21-11 with 12:01 left in the first half. Following a dunk by Purdue center Matt Haarms to make it 25-13, Edwards would go on to outscore OSU 10-2 to build a 20-point lead.

Leading 46-20 late in the first half and with the ball, the Purdue crowd was imploring Edwards to shoot a three and match the score of Purdue’s football win over Ohio State at 49-20. Instead, Edwards drove for a layup and made it 48-20 at the half.

Things got no better for the Buckeyes from there.

The Buckeyes had just one scorer in double figures as freshman Jaedon LeDee scored a career-high 16 points. LeDee started in place of Kaleb Wesson.

Purdue guard Carsen Edwards did whatever he wanted, whenever he wanted. The deep shots were falling and he was also able to drive to the basket at will. He finished with 25 points on 9-of-16 shooting and hit four of his eight threes.

+ One game after scoring a career-high 29 points, freshman guard Justin Ahrens went scoreless, missing his only field goal attempt. Kaleb Wesson’s absence was felt all over, but perhaps no individual felt it more than Ahrens, who didn’t have one open look on the day.

+ Kaleb Wesson watched the game from the end of Ohio State’s bench and likely felt quite a bit of responsibility for what happened. His presence wouldn’t have changed who won the game, but his team certainly wouldn’t have been as helpless as they were without him. After the game, Chris Holtmann emphasized the vast drop in defense between Kaleb Wesson and anybody who replaces him.

+ The Buckeyes took good care of the ball, turning it over just nine times, so that’s a positive.

+ Jaedon LeDee became the final Ohio State freshman to lead the team in scoring in a game this season. 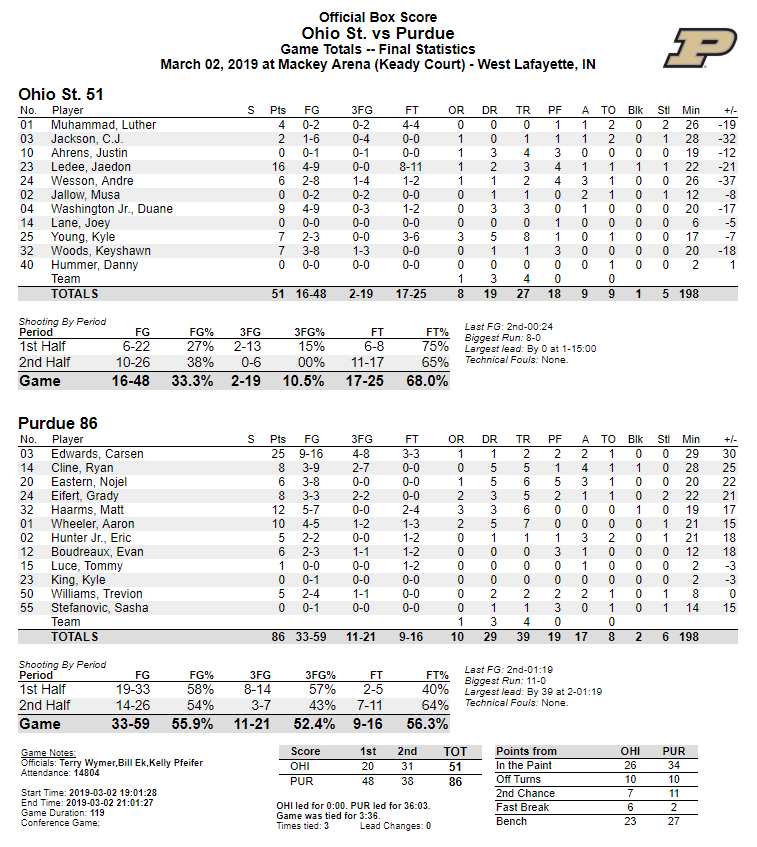