Four-star Warren, Michigan offensive lineman Grant Toutant announced that he has decommitted from Penn State and has committed to Ohio State. He released the news via Twitter. 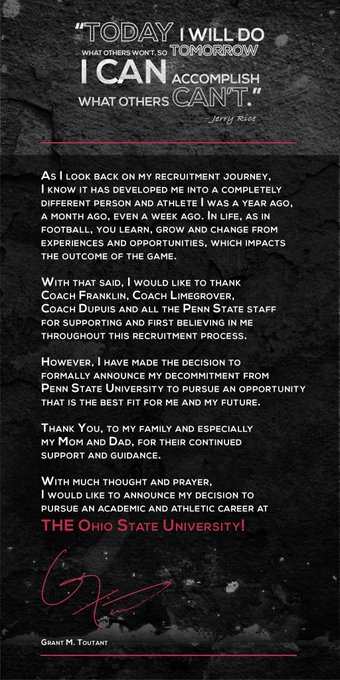 Toutant is the No. 29 offensive tackle in the 2020 class per the 247Sports Composite and the No. 324 player overall. He is ranked the No. 9 player in Michigan.

Ohio State now has five offensive linemen committed, though 5-star Cincinnati commit Paris Johnson could be considered a “soft” commit until he reaffirms his commitment following his spring visits around the nation.

Things still look good for Johnson ending up a Buckeye, however, and should those glad tidings continue, Toutant will join a class that features Johnson — the No. 1 offensive tackle in the nation, New Jersey center Luke Wypler — the No. 1 player at his position in the nation, and a pair of 3-star Ohio linemen in Jakob James and Trey Leroux.

The Buckeyes now have 11 players committed and the class is currently ranked No. 1 in the Big Ten and No. 8 in the nation by 247Sports.