There were no defensive commitments in Ohio State’s 2020 recruiting class until the April commitment of 4-star defensive back Lejond Cavazos. He actually decommitted from OSU back in December, which means the Buckeyes went quite a while without anybody on the defensive side of the ball.

With his commitment in April, Ohio State then went over two months without any further defensive additions.

But don’t expect the Buckeyes to go another two months without a verbal commitment from a defender.

This past weekend was the final binge of spring official visitors in college football, and Ohio State hosted some very talented defensive prospects.

Ransom was seen as a Texas lean, but this was not his first visit to Ohio State. It may not have been his last, either.

Martinez could end up on defense or at receiver in college, it will just depend on the fit and the need of the school that he ultimately chooses. The Buckeyes are viewed by many as the favorite.

If you are looking for which recent visitors could be the next to commit to the Buckeyes, that would be Darrion Henry, Kourt Williams, and Cody Simon.

Henry is the No. 11 defensive tackle in the nation and has visited more college towns this spring than whatever college bands the kids are listening to these days.

Rivals ranks Henry as the No. 45 player in the nation. It would not be a surprise to see him make an announcement in the near future following this final official visit to Ohio State. The Buckeyes are the overwhelming favorite.

Williams and Simon are two of the top linebackers on Ohio State’s board.

Thanks to stellar camp performances this spring, Williams made a move up the Rivals rankings. He is now the No. 10 outside linebacker and the No. 100 player overall.

Williams has now taken all five of his official visits, and none of them were to an in-state California school. With his visits now over, a decision could soon follow.

Simon is the No. 10 outside linebacker and the No. 154 player in the 247Sports Composite. He is ranked the No. 4 player in his home state of New Jersey.

Like Williams, Simon is a speedy linebacker who could add to the versatility against spread offenses that is becoming more and more important.

The Buckeyes are still looking for their first linebacker commits in the 2020 class and right now Simon and Williams seem like their two best bets.

Another to watch is 3-star Maryland linebacker Mitchell Melton, who took an official visit to OSU last weekend and was at Michigan this weekend. He visited Notre Dame the week before he was at Ohio State. With those visits now out of the way, a decision is coming July 3.

Looking at the class as it stands — and could stand in the next two weeks — some pass rushers will be put on the wishlist next.

The Buckeyes have already received commitments from two talented cornerbacks in Lejond Cavazos and Clark Phillips, but every pass defense starts with a pass rush.

There isn’t much out there for the Buckeyes at the moment in 2020 in terms of elite pass rushers. Darrion Henry or Ty Hamilton may get there, but they could both be projected more as inside guys.

The good news for Ohio State is that they have covered edge rushers pretty well in 2019 with Zach Harrison and Noah Potter, and in 2021 with Jack Sawyer and possibly more.

A couple of safeties will eventually need to be added, and Ohio State has hosted some of the nation’s best. They may be playing catch-up a little bit, because as secondary coach Jeff Hafley said this spring, he was in the NFL when the rest of his college coaching competition was building relationships with the 2020 recruiting class.

Based on how the current Buckeye commits felt about this weekend, they will be getting some company soon. Several of them took to social media to let Buckeye fans know that they were putting in the work to land the best class in the country.

There’s still more on the way☺️ 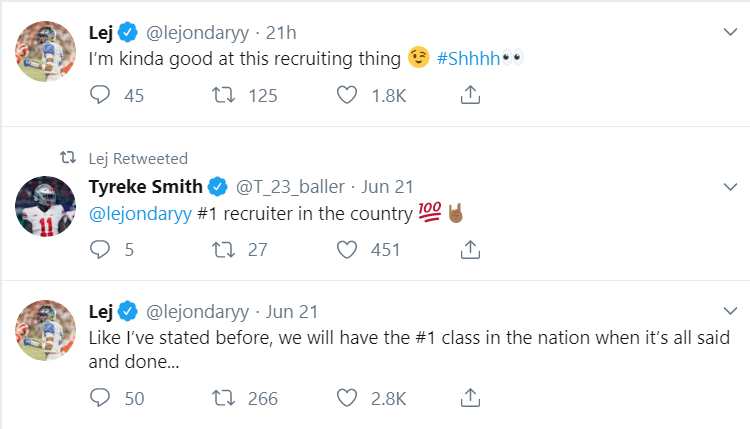