The No. 10 player on this list played in four games last season as a true freshman, but spent the spring running with the ones and twos, and is primed to be counted on quite a bit this season.

No. 10 — Master Teague, Freshman Running Back

Master Teague was involved with Ohio State for nearly a year before he showed up at camp intent to finally earn an offer.

Teague, a Tennessee native, showcased the necessary footwork and agility to impress the Ohio State coaches in June of 2017, and the hand-timed 4.30 didn’t hurt either.

Ohio State offered after his camp performance and he committed two days later.

With offers coming in from schools like Ohio State and Clemson, Teague soon went from a 3-star under-the-radar running back to a 4-star prospect ranked in the Top 10 at his position.

Teague ended up ranked the No. 11 running back in the 247Sports Composite and the No. 228 player overall.

He enrolled early and played in the Buckeyes’ first two games last season. 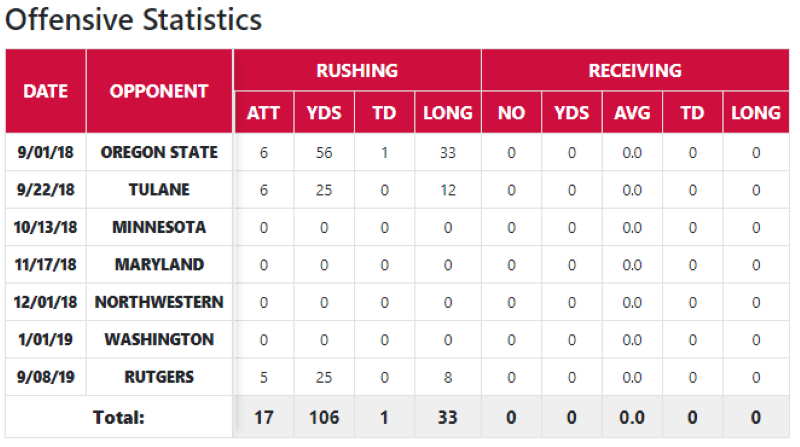 What He Does Well

Master Teague is not a time waster as a running back. He gets the ball and he gets upfield.

He is not a dancer, but more of a one-cut or no-cut guy until a defender appears.

Teague is very fast and in his limited attempts last season had a 33-yard touchdown run. That particular run featured him bouncing off of tacklers and staying upright.

He has gotten tougher and stronger over the last year, which is going to be necessary for him. At 5-foot-11 and 220 pounds, he very much looks like a power back, but he hasn’t had an opportunity to show those skills yet.

Teague ran with the ones and twos in the spring and will be competing with fourth-year junior Demario McCall to be JK Dobbins’ backup.

Winning that job will be key, because there is rarely an abundance of touches for the No. 3 running back in Ohio State’s offense, especially with a quarterback in the offense who can run the ball as well.

Still, he and McCall are very different backs, so there could be room for both in the offense. And if both show the ability to make plays, then both will play.

Running backs coach Tony Alford will need to make sure that they don’t fall into the same trap that Dobbins did last year when he was trying to hit home runs with each carry, which is not how home runs are hit.

What They Are Saying

“You can tell he’s much more settled, much more comfortable in his own skin, if you will. There is a toughness factor that he has become a lot grittier, grimier-type player and finishing things off more. And just his knowledge of what’s going on around him has allowed him to play faster. I’m very pleased with what he’s done in the past four days.” — Running backs coach Tony Alford on Master Teague’s improvement.

“His growth has been immense as well, and his maturity level of how he plays. He’s not just kind of sitting on the side kind of taking it as it comes. He’s much more aggressive. There’s some tenacity, some toughness that he has shown this spring that quite frankly took him a little bit of time to grow into that. And that’s not a bad thing. Some guys go at a different rate. J.K. was at a faster rate of speed as far as his ability to bite and attack things. He was a little faster. That’s not a negative toward Master or anybody else. That’s just the growth maturations are different for guys and the timing that they do it.

“But Master Teague is a totally different guy now than what he was mid-season, and even towards the end of the season. And he knows that because we’ve told him that. You watch him today, he’s putting his face on people, he’s running harder, he’s much more aggressive, he knows exactly what’s going on. He knows this offense. He’s engaged in the meetings. He always kind of sat back, but now, ‘this is what this is’ he can get up and teach it. So I’m really pleased with where he is right now.” — Tony Alford on Master Teague’s growth from last year.