The Ohio State depth chart has a few notable changes for the Buckeyes’ week three matchup with Indiana.

Hilliard is now listed as the backup at the Bullet position, which is designated as the strong safety/linebacker on the official depth chart.

Hilliard did not work at the Bullet much, if at all, during spring practice before suffering that injury. He is now listed as the second-team player there, behind Brendon White.

Much of the rest of the depth chart remains unchanged as the Buckeyes head into their conference opener.

The starters at quarterback, running back, and across the offensive line are the same as they have been for the first two weeks.

Justin Fields, J.K. Dobbins, Thayer Munford, Jonah Jackson, Josh Myers, Wyatt Davis, and Branden Bowen are back. Their backups are all listed the same way they were a week ago as well.

The backup running back spot continues to be a four-way split between Master Teague, Demario McCall, Marcus Crowley, and Steele Chambers.

At the wide receiver positions, Austin Mack and Chris Olave are listed as co-starters at the Z position. Binjimen Victor and K.J. Hill are the starters at X and H, respectively.

Luke Farrell is the starting tight end, with Jeremy Ruckert, Jake Hausmann, and Rashod Berry all listed with an “OR” at the backup spot.

On the defensive side of the ball, senior DE Jonathon Cooper is still out. Chase Young is starting at one end spot, while Tyreke Smith and Tyler Friday are listed with an “OR” at the other spot.

Javontae Jean-Baptiste and Zach Harrison are the backups.

Davon Hamilton and Jashon Cornell are once again starting at nose tackle and 3-tech defensive tackle.

Pete Werner and Malik Harrison are the starters at the SAM and WILL linebacker spots, respectively, while Tuf Borland and Baron Browning are co-starters at the MIKE spot. 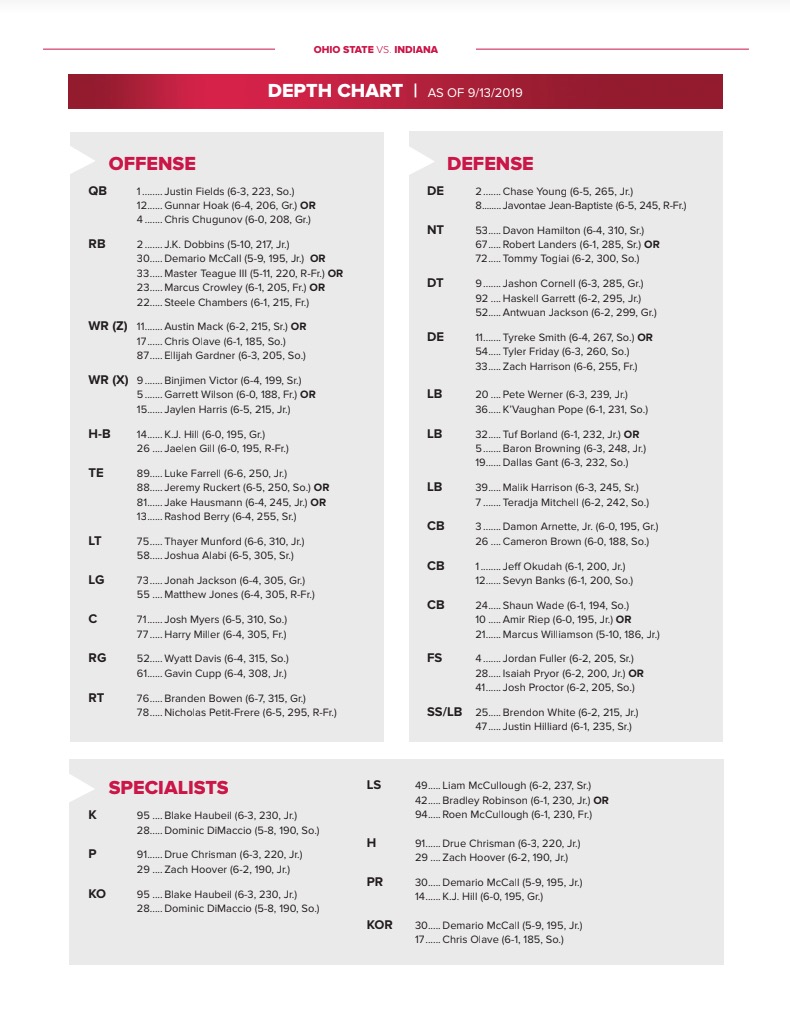