There are some notable changes to this week’s Ohio State depth chart, especially along both lines.

Junior LT Thayer Munford is off the injury report and officially good to go. That means that the starting five of Munford, Jonah Jackson, Josh Myers, Wyatt Davis, and Branden Bowen is back.

With Josh Alabi out for another week, redshirt freshman Nick Petit-Frere is the backup at both tackle spots.

The news is not as good on the other side of the ball. Sophomore DE Tyler Friday is out and senior DE Jonathon Cooper is a game-time decision. That means sophomore Tyreke Smith is a co-starter with Cooper at one end position, and redshirt freshman Javontae Jean-Baptiste and true freshman Zach Harrison are backing up Chase Young at the other end position.

Senior WR Austin Mack is listed as a game-time decision at the Z receiver position. He and sophomore Chris Olave have been co-starters all season. If Mack can’t go, Olave could have a breakout performance against Wisconsin.

Senior WR C.J. Saunders is once again listed as out for the game. That leaves redshirt freshman Jaelen Gill as the backup for senior K.J. Hill at the H receive position.

Junior TE Jake Hausmann is back on the depth chart for the game against the Badgers. He was out due to injury against Northwestern, but is now once again listed as a co-backup to Luke Farrell, along with Rashod Berry and Jeremy Ruckert.

Junior LB Baron Browning is also back at the MIKE spot. He, too, missed the game in Evanston, but should be full-go this weekend. Browning and junior Tuf Borland are listed as co-starters.

Most of the rest of the depth chart is unchanged.

You can see the full depth chart below, or click the link at the bottom of this article to download a PDF copy. 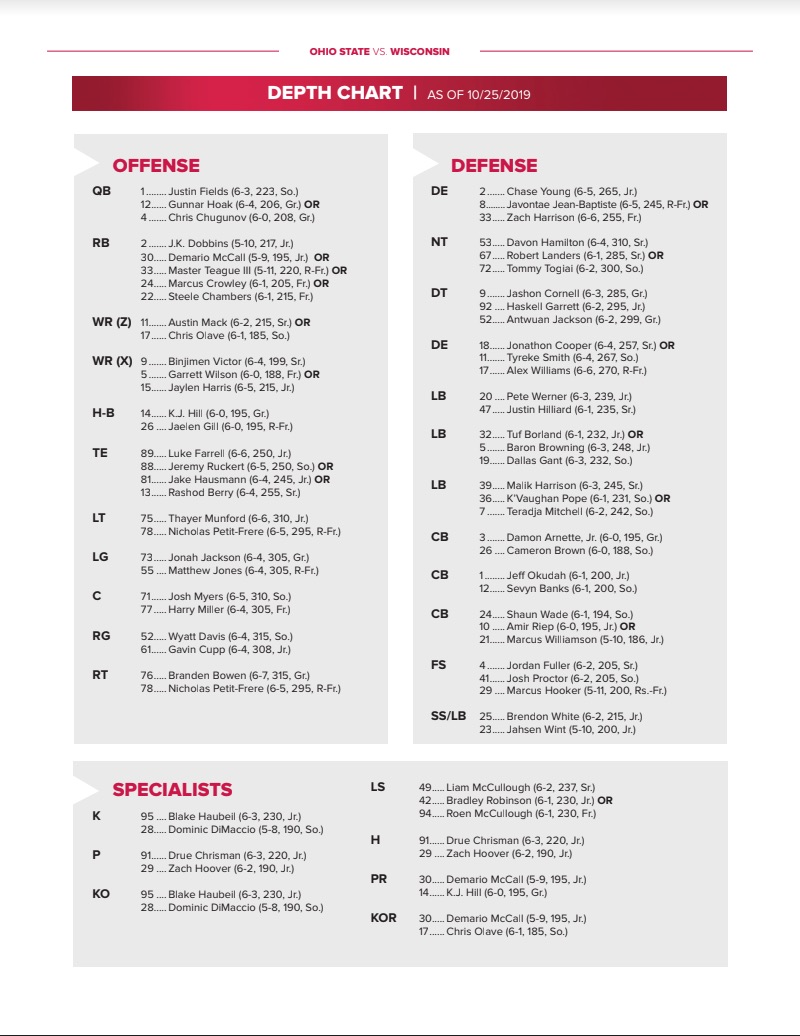