The game, which was played in St. John Arena, featured a 17-point comeback by Kent State to tie the game in the second half, which was then followed by the aforementioned stretch run to end the game.

Junior forward Kaleb Wesson led the Buckeyes with a team-high 17 points on 5-of-9 shooting and grabbed six rebounds.

The Buckeyes were surprisingly led on the glass by sophomore guard Duane Washington with seven boards. He was also instrumental on the offensive end, scoring 16 points on 6-of-9 shooting and adding in a team-high three assists.

Forwards Andre Wesson and Kyle Young led the team in +/- with a +19, respectively.

Kent State actually began the game with a 5-0 lead and the Buckeyes didn’t have their own lead until a Washington three-pointer four minutes into the game.

Golden Flashes Danny Pippen and Antonio Williams kept Kent State in the game throughout the first half, but a 7-0 run by the Buckeyes gave them a 24-15 lead with 6:32 remaining in the first half. A jumper and two free throws by Washington, followed by a three-pointer by Carton pushed the lead out to 14 points at 33-19.

Muhammad broke the tie with five consecutive free throws. Carton then drove the baseline and spun in a ridiculous reverse layup to make it 55-48.

Three minutes later, Carton stole the ball from Kent State, got it up ahead to Washington, and Washington then threw it up to the rim for a Carton alley-oop dunk, making it 63-48 and ending any hopes the Flashes had of upsetting their in-state brethren.

Up next for Ohio State is a home tilt this Friday night against Morgan State. The game will tip at 9:00 pm and air on BTN. 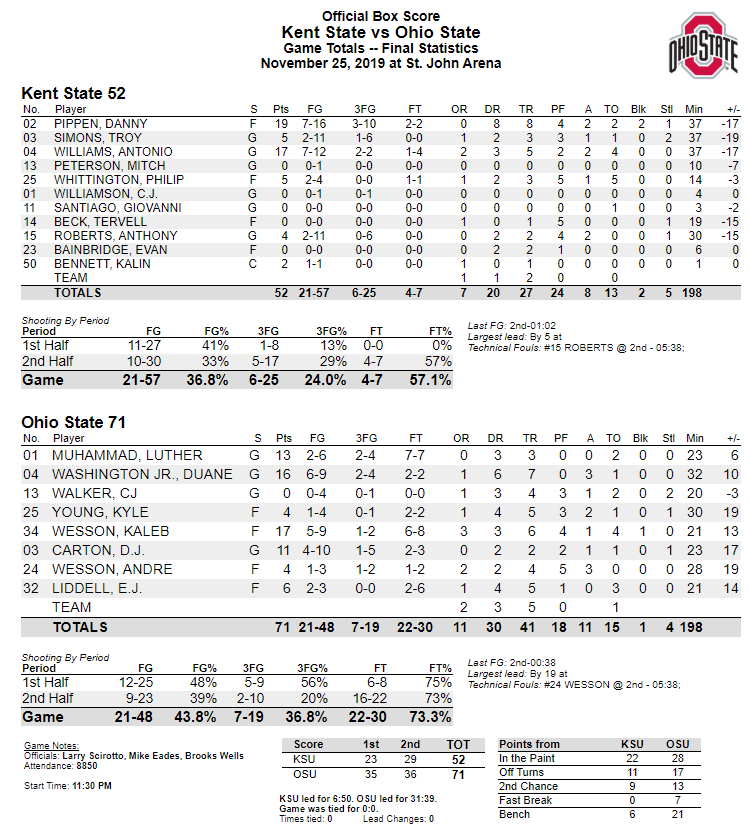