COLUMBUS — A week from now, the only thing that will be remembered about this game is that it began and ended with a W, but never once did those Ws spell ‘Wow.’

No. 18 Ohio State (1-0) opened their season Wednesday night with a hard-fought 64-56 win over the in-state rivals Cincinnati Bearcats.

After the game, Buckeye head coach Chris Holtmann called it an “old-fashioned rock fight,” citing the UC defense as the most physical he’s seen as a coach in a season opener.

Turns out, the physicality was right up junior forward Kyle Young’s alley, as he led the Buckeyes with career highs in points (14) and rebounds (13). He was the only Ohio State scorer in double figures.

Junior Kaleb Wesson scored eight points and grabbed 11 rebounds, but spent much of his time as a facilitator because of the ferocious Bearcat defense.

The Buckeyes did not score their first point until the 12:20 mark of the first half when Young got things going with a dunk. It was their first basket in eight attempts. Because of the Ohio State defense, however, they only trailed 6-2 at that point.

Young scored the first six points for the Buckeyes, and it wasn’t until Kaleb Wesson laid one in to make it 10-8 UC at the 8:39 mark that a second Buckeye scored a point.

Less than a minute later, Andre Wesson drilled a three-pointer to give Ohio State their first lead of the game at 11-10.

A pair of threes by Cincinnati junior guard Keith Williams was part of a 10-2 run that built a 25-17 Bearcat lead with a minute to play in the first half.

Kaleb Wesson sank a three-pointer at the 17:42 mark of the second half, capping a 9-3 run that cut Cincinnati’s lead to 29-28. A pair of free throws less than a minute later from point guard CJ Walker gave the Buckeyes a 30-29 lead.

Three-and-a-half minutes went by without any scoring, but that streak was eventually ended when Kaleb Wesson drained another three-pointer to stretch Ohio State’s lead to 33-29 with 13:17 left in the game.

Cincinnati got it back down to one following three free throws by UC guard Jeremiah Davenport, but Kyle Young again answered for the Buckeyes with yet another basket around the rim.

Leading 44-41 following a Keith Williams basket, DJ Carton pushed the ball up-court, drove the basket and scored on a reverse layup to give the Buckeyes a 5-point lead with 8:12 to play.

Carton then responded following the next Bearcat bucket by draining his first three-pointer of his Ohio State career, making the game 49-43 Buckeyes with 7:35 remaining. Carton scored nine points in 25 minutes, but had four turnovers to just two assists.

Less than 30 seconds later, Luther Muhammad added a three of his own to give Ohio State a 9-point lead, which was their largest of the game.

The Bearcats weren’t ready to call it a night, however, as they went on an 8-1 run to cut the OSU lead to two points at 53-51. Duane Washington sank a pair of free throws, which were immediately answered by a dunk from Cincinnati center Chris Vogt.

Freshman forward EJ Liddell dropped in a layup and two-and-a-half minutes later, Carton drove the lane and was fouled by Vogt, who picked up his fifth and final foul of the game. Carton sank both free throws to give Ohio State a 59-53 with 2:16 to play.

The Bearcats were able to cut the lead to four points, but CJ Walker closed it out with four free throws to give the Buckeyes the 64-56 win, which was the same score of their victory over Cincinnati last year. 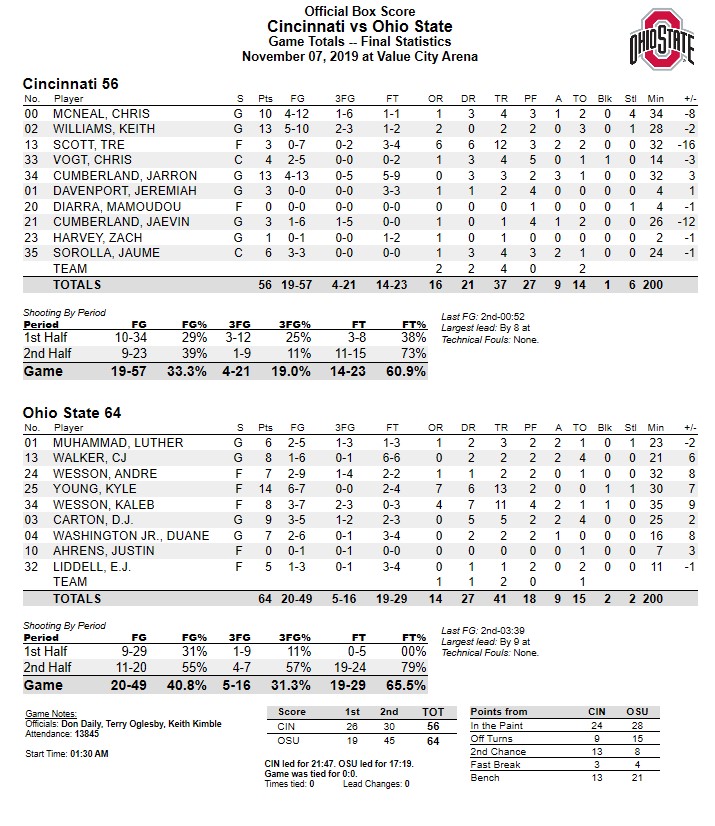